A Woman Defied Swiss City's Burqa Ban, And It Was Not Tolerated 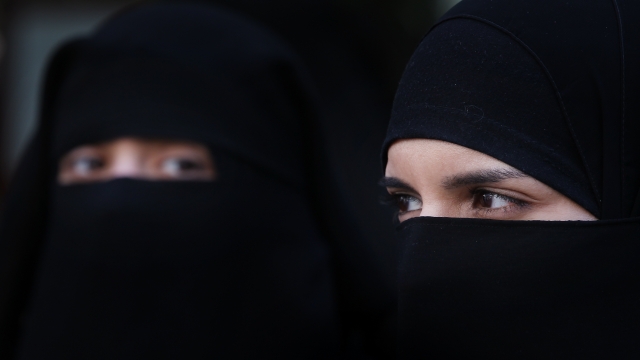 SMS
A Woman Defied Swiss City's Burqa Ban, And It Was Not Tolerated
By Katherine Biek
By Katherine Biek
July 7, 2016
The ban prevents women — both citizens and tourists — from wearing the full-face veils in public.
SHOW TRANSCRIPT

Two people in Switzerland are already in trouble for defying a ban against wearing burqas that went into effect July 1.

Ticino's regional parliament approved a law preventing women from wearing the head-to-toe coverings in public last year, soon after a series of terrorist attacks occurred in Paris, raising the terror alert level in other European countries.

Local media report a Swiss woman and a French-Algerian businessman both purposefully opposed the ban Friday. The woman is a member of the radical Islamic Central Council Switzerland, while the man is a political activist.

He was fined $204 for incitement to break the law, while the woman could face a fine of more than $10,000 for wearing a burqa in public.

Ticino authorities are not excluding tourists visiting the region from the ban — something quite notable since 40,000 tourists from the Middle East visited Ticino in 2014.

In a statement released on Twitter, the Saudi Arabian Embassy in Switzerland's capitol warned about the ban, saying "the embassy reminds all honorable citizens of the necessity to respect and conform to Swiss rules and regulations in order [to] avoid all problems."

It's just the region of Ticino that's enforcing the ban, not the entire country of Switzerland. But more and more countries are implementing national burqa bans.

France was the first to do so in 2011, and Belgium, the Netherlands, Chad, Cameroon and Senegal have all enforced national bans since then.

This video includes clips from France 24 and Ticino Turismo and images from Getty Images. Music provided courtesy of APM Music.