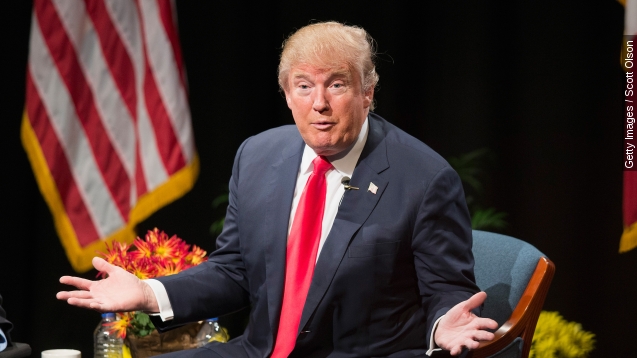 SMS
A UK Ban Would Put Donald Trump In A Very Exclusive Group
By Katie Link
By Katie Link
December 9, 2015
A petition circulating in the U.K. to ban Donald Trump from visiting has gained more than 300,000 signatures.
SHOW TRANSCRIPT

Lots of people in the U.K. want to ban Donald Trump from visiting. Their motive:

"Donald J. Trump is calling for a total and complete shutdown of Muslims entering the United States," Trump said.

A petition to ban him has more than 300,000 signatures, which means Parliament has to review it.

If banned, Trump would join the not-very-auspicious club of celebrities blacklisted in the U.K.

Mike Tyson was on the "do-not-enter" list due to his rape convcition.

So was Dieudonne M'bala M'bala, a French comedian often accused of anti-Semitism.

Also, the current president and first lady of Zimbabwe.

And everyone's favorite homemaker, Martha Stewart, in response to her obstruction-of-justice charges.

Government officials say a Trump ban isn't the answer. And a spokesman for Trump said the presidential candidate doesn't have any U.K. travel plans in the near future.