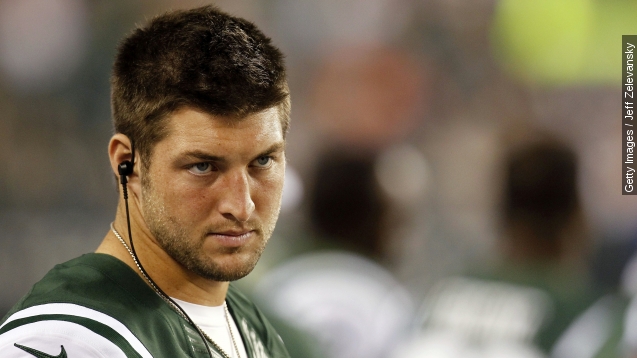 The Heisman Trophy winner has been dropped from another NFL team: the Philadelphia Eagles.

People seem to like Tim Tebow a lot, but he's had trouble holding down a steady job.

After an extremely impressive college career...

...he was drafted in the first round by the Denver Broncos in 2010.

"Thank you so much, I appreciate it," Tebow told the Broncos after being drafted.

And he did pretty well in Denver...

But after the Broncos got this guy (PEYTON MANNING), Tebow got traded.

"I'm so excited about being a Jet," the quarterback said. He actually said "excited" more than 40 times in his first press conference.

The excitement only lasted a year.

"After one year in New York, the Tim Tebow experiment is thankfully over!" Huffington Post said of the news.

But the Patriots snatched him up! You go, Tim Tebow!

But sacked him before the regular season. (Get it?)

He took a little break from the gridiron. And after all that who wouldn't?

"And we welcome our newest college football analyst, Tim Tebow. Welcome to the ESPN family. Off to a great start isn't he? I mean look at this," ESPN's Joe Tessitore said in Tebow's first stint with ESPN.

In 2015, he was picked up by the Eagles and well, we all know how that went. So much for "brotherly love."