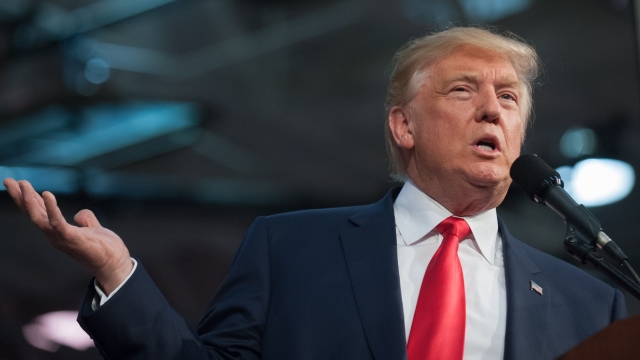 "These people are horrible people. They're horrible, horrible liars," Donald Trump said at a rally in West Palm Beach, Florida, on Thursday.

The Trump campaign has been in damage control mode for the past week.

It all started with this: "I did try and f--- her, and she was married," Trump said in a video released by The Washington Post.

On the afternoon of Oct. 7, The Washington Post published a 2005 video of Trump making lewd comments about women.

"I just kiss. I don't even wait. And when you're a star they let you do it. You can do anything," Trump said in the video.

"Whatever you want," Billy Bush, then-host of "Access Hollywood" said.

The campaign released a statement quickly, calling the comments "locker room banter," which didn't sit well with politicians on either side of the aisle.

"Anyone who knows me knows these words don't reflect who I am. I said it, I was wrong and I apologize," Trump said in the prerecorded video statement shared on social media.

Trump was scheduled to campaign in Wisconsin with Republican House Speaker Paul Ryan on Oct. 8. But Ryan canceled that joint appearance.

Things came to a head during the second presidential debate on Oct. 9.

Anderson Cooper asked, "Have you ever done those things?"

"And women have respect for me. And I will tell you — no I have not," Trump said.

A poll published Oct. 10 showed Hillary Clinton will an 11-point lead with likely voters. It was conducted after the video was published but before the second presidential debate.

On Wednesday, CBS released video from an"Entertainment Tonight" segment in 1992. In that video, Trump says of a young girl, "I'm going to be dating her in 10 years, can you believe it?"

After all this, a wave of women started coming forward with stories about being assaulted by Trump. On Oct. 12, The New York Times, The Palm Beach Post and People magazine all published sexual assault allegations against Trump.

In a letter from Trump's attorney to The New York Times on Wednesday night, Trump threatened to sue the paper, demanding a retraction and an apology.

The letter said the letter was "reckless, defamatory and constitutes libel per se."

The New York Times responded Thursday in kind, with a letter refusing to remove the article, saying, "Nothing in our article has had the slightest effect on the reputation that Mr. Trump, through his own words and actions, has already created for himself."

Trump took to Twitter early on Oct. 13 to deny the allegations in The New York Times and People magazine. Those denials continued on the campaign trail.