A Third Of Americans Are Considering A Third-Party Candidate 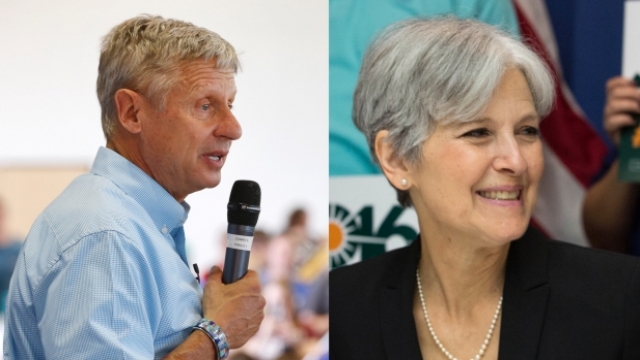 SMS
A Third Of Americans Are Considering A Third-Party Candidate
By Ben Lawson
By Ben Lawson
August 21, 2016
Dissatisfaction with Hillary Clinton and Donald Trump has created an opportunity for third parties.
SHOW TRANSCRIPT

Some Americans are really unhappy with their two choices for president — so much so that a surprising amount of people are considering voting for a third-party candidate.

An ABC News/Washington Post poll found that 35 percent of respondents are considering voting for a third-party candidate.

But the poll also found that a majority of people are worried that voting for a third-party could cause their least preferred candidate to win the presidency.

One of the biggest factors that will decide the rest of the election cycle for the candidates is whether they can make it onto a debate stage with Hillary Clinton and Donald Trump.

A nonpartisan commission decides who makes the stage by averaging the results from five different polls. Johnson is hitting 12 percent in some polls but that's not enough to make it on stage. And the qualifications have left both candidates pretty frustrated.

Although, the commission is reportedly still preparing a podium for a third-party candidate just in case Johnson or Stein make the cut.