A Stitch And Time: How Production Firms Are Making VR Movies A Reality 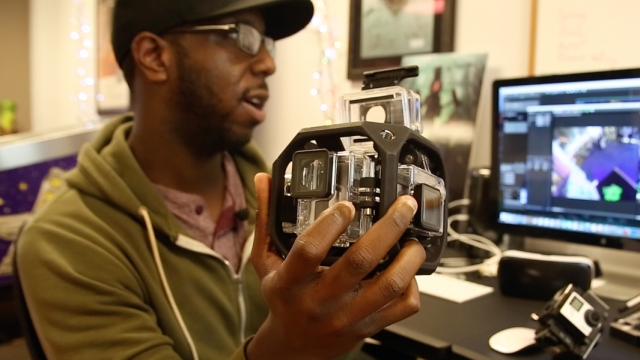 SMS
A Stitch And Time: How Production Firms Are Making VR Movies A Reality
By Leah Becerra
By Leah Becerra
March 18, 2016
Making a virtual reality film is a lot harder than you'd think.
SHOW TRANSCRIPT

Ready or not — virtual reality is here.

And one way people can consume VR is in the form of a movie. To get an idea of what all goes into making a VR movie, we talked to a firm based in Columbia, Missouri.

Good Wizard Productions recently wrapped up the first episode of "Dark Visions," a horror, thriller anthology you can check out on YouTube.

One thing that should be immediately clear: Making a film for a 360-degree experience is not like making a traditional film, like the ones you see at a theater.

"One of the challenges of doing VR is that you're shooting in a 360 environment and — how do you shoot? How do you tell a story in a 360 environment?" Campbell said. "You're not gonna see what you shot or be in that area till after the shot's done. In some ways, it's kind of like being in a play — to a certain extent. You have to really rely on your actors."

There are a few tools available to production teams, tools that would allow directors to see what's going on without being in view of the 360-degree camera rig, but they're costly. And there are more creative ways to get around the issue — like masking.

"Masking the lighting. Masking the mics. Masking where you are as a director so you can kind of get an idea of what's going on. ... Or even being part of the scene. So you might be — in some of these scenes, we play characters so we can see what's going on in the scene as we direct," Campbell said.

Shooting in VR also requires a different setup than a traditional film. Good Wizard Vice President of Production Corey Ransberg introduced us to one of the rigs that makes 360-degree video possible.

"This is the 360Freedom rig, This is like their basic standard rig with six cameras in it. Some people make rigs with more cameras on it than this, but this is a good amount for what you need to do," Ransberg said.

Some companies have made rigs with a lot more cameras; others use a single camera that can do all the VR capturing.

Good Wizard's six-camera rig covers all the spaces it needs to, with just enough overlap so things don't usually disappear or get lost in seams during post-production — which can happen.

Seams are the areas where one camera's footage butts up against another camera’s footage. These different views have to be merged to create a more polished VR experience.

"With different rigs there might be less seams if you have more cameras — or if you have less cameras but a wider lense — that can sort of alleviate the issue, too," Ransberg said.

Producers aren't usually doing the stitching by hand because that would take way too long. Instead, software does most of the work — but software isn't always perfect, and producers will have to do some fine-tuning, which still takes a decent chunk of time.

"Yeah — that's me. That's me starting it and moving it. See look at that," Ransberg said.

If you're just listening to the audio version of this story, the video shows Corey's body being split by a seam. Think about those fun-house mirrors that contort a person's shape. Now think about what it might look like if two of those mirrors were stretching your body — and somehow the two reflections were combined. Except, at the point where the reflections join, stuff gets lost.

The video quality is obviously important, but something people don’t often consider is how important sound is to the final product.

"Sound is one of the most important things with VR because, not to mention, it just helps you look for things," Ransberg said. "It also affects your equilibrium, too. ... So, if you're watching something in VR and there's something really weird that happens but doesn't correspond with the sound, people can get sick — and all kinds of things."

As you can see — or hear — a lot goes into making a VR movie. But companies are starting to make consumer-grade versions of the technology Good Wizard and other firms are using. Sooner or later, all that competition will drive amateur production costs down, and who knows, maybe a 360-degree rig could replace the family camcorder.

"There's gonna be nothing like being able to VR Christmas morning with your kids and go back and re-live it a year later or 10 years later or 20 years later," Campbell said.

But hopefully by that point, watching VR won't be such a singular experience anymore.

This video includes a clip from Good Wizard Productions.