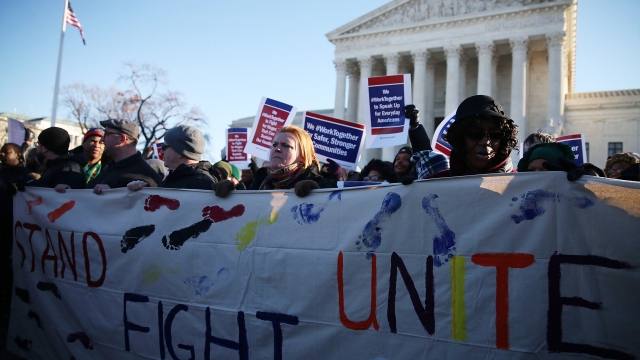 Labor unions won big at the Supreme Court Tuesday after a split decision allowed them to continue to collect money from nonmembers who don't want to pay for collective bargaining activities.

The case, Friedrichs v. California Teachers Association, argued those fees were violating the First Amendment protections against compelled speech, forcing teachers to pay even when they disagreed with the union's stance. Opponents say the teachers should still pay because they still benefit from the union's collective bargaining.

The win leaves an almost 40-year-old precedent in place, but it also proves at least two vital points: the importance of a full nine-member court, and the significance of a justice's ideological background.

"In a 4-4 split that would mean a circuit court decision stayed in place. Circuit courts are only binding on that part of the country that falls within that circuit," Dr. Marvin Overby of the Kinder Institute for Constitutional Democracy said.

Split decisions mean no national precedent, and the court's current ideological makeup will likely lead to more 4-4 verdicts on divisive issues, like affirmative action. Since the majority of circuit courts have more left-leaning judges on them, the status quo could unevenly benefit liberals in the short term.

"So a majority of the decisions coming out of the majority of the circuits impacting a majority of American citizens are going to be delivered by presumably more liberal panels in these circuits, which means lack of the Supreme Court able to overturn them means that leaves the liberal, not the conservative, interpretation in play," Overby said.

Based on oral arguments, the late Justice Antonin Scalia would've likely cast a deciding vote against the unions. So this case does help prove that ideological background is a vital consideration in appointing a justice.

But cases that end in a split decision aren't actually over yet, it just means they can be reheard at a later date. And the challengers in the case say they will be petitioning for another hearing.

Terry Pell, president of The Center for Individual Rights supporting the plaintiffs, said: "With the death of Justice Scalia, this outcome was not unexpected. We believe this case is too significant to let a split decision stand."

This video includes images from Getty Images and a clip from Newsmax.com.