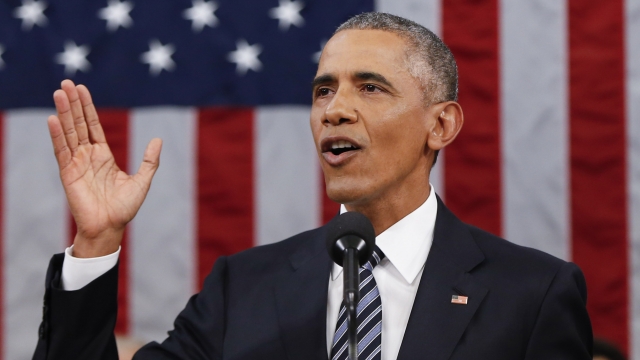 SMS
A Senate Recess Could Give Obama An Opening To Appoint A SCOTUS Judge
By Eugene Daniels
By Eugene Daniels
February 17, 2016
Senate Republicans have come out against President Obama submitting a SCOTUS nominee, but he may not need their support.
SHOW TRANSCRIPT

"Recess appointments are interesting. There’s a history of them in the Supreme Court," Dr. Marvin Overby of the Kinder Institute on Constitutional Democracy said.

Article II, Section 2, Clause 3 says, "The President shall have Power to fill up all Vacancies that may happen during the Recess of the Senate, by granting Commissions which shall expire at the End of their next Session."

That basically means the person can start their job immediately and without a Senate confirmation hearing. And "all vacancies" include empty seats left by deceased or retired Supreme Court justices. A recess nomination could be a way for President Obama to sidestep Republican opposition to his pick for the next Supreme Court justice. And it's not as rare as you might think.

"I think I counted 12 over the course of American history. Which would actually be one in 10 of all people who have served on the Supreme Court," Overby said.

The last president to use a recess appointment was President Dwight Eisenhower, who used it three times to fill Supreme Court vacancies. But there is a caveat here.

"The Senate is only in recess when the Senate says it’s in recess. So in some ways that hands a lot of power to the Senate majority leader who can call the Senate back into session once every 72 hours for some sort of pro forma business, so they wouldn’t officially be in recess," Overby said.

And anyone appointed during a recess by the president would only serve until the end of Congress' term, which in this case is the end of 2017, at which point they'd have to be renominated. The White House has said it doesn't intend to use a recess appointment to fill the empty seat. At least, for now.

This video includes images from Getty Images and clips from C-SPAN and the White House.