A-Rod Is Breaking Records, But No One Seems To Care 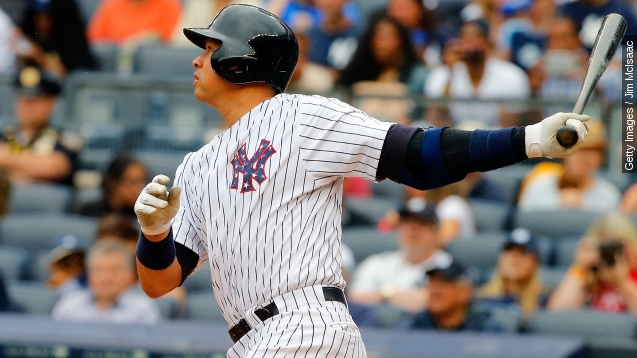 SMS
A-Rod Is Breaking Records, But No One Seems To Care
By Carter Woodiel
By Carter Woodiel
July 6, 2015
Yankees slugger Alex Rodriguez is breaking more records than ever in 2015, but his checkered past has made for a muted reaction in the baseball world.
SHOW TRANSCRIPT

For Yankees designated hitter Alex Rodriguez, 2015 has been the year of the milestone.

Earlier this year, Rodriguez passed Derek Jeter and Hall of Famer Stan Musial for ninth on the career runs scored list, according to Baseball Reference. Later, he recorded his 2,000th run batted in, placing him fourth all-time. And less than a week after that, he recorded his 3,000th hit.

So why does it seem like no one is talking about A-Rod's recent achievements?

One reason is his past steroid use, which was so severe it forced him to sit out last year with a league suspension. But another reason might be found in his contract.

A clause in the $275 million contract signed by Rodriguez in 2007 gave the slugger a $6 million bonus for passing Willie Mays on the all-time home run list, a feat he achieved this past May.

But the Yankees didn't give A-Rod the money, saying his past steroid use stripped the milestone of its marketability. The dispute was settled just this week, with the Yankees announcing they would donate $3.5 million to charity.

The Yankees have acknowledged other milestones their DH has achieved this year, like his 3,000th hit, but not with the enthusiasm the team has displayed in the past.

The team pulled out all the stops when Derek Jeter joined the 3,000-hit club in 2011, even presenting the star with a sculpture to commemorate the occasion.

Rodreguez's milestones are important when considering his legacy, which will be up for debate when, as expected, his name appears on a Hall of Fame ballot.

Former teammate Jorge Posada said PED users like A-Rod should be kept out of the Hall in an interview this year with CBS.

As for A-Rod himself, he's just happy to be on a ballfield.

"More than anything, I'm just feeling very grateful to be back playing baseball," he said after a game in April.

This video includes images from Getty Images and Breakzlinkz / CC BY 3.0.