A-Rod Is Back And So Is The Drama 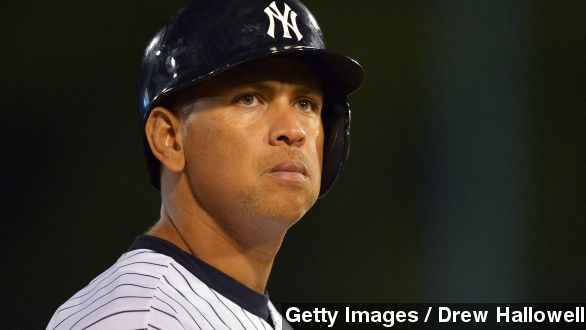 SMS
A-Rod Is Back And So Is The Drama
By Jay Strubberg
By Jay Strubberg
March 4, 2015
A-Rod's journey back to baseball will be no walk in the park. Here's a look back at his PED scandal and some problems he could face moving forward.
SHOW TRANSCRIPT

Alex Rodriguez laced up his cleats and donned those familiar knee-high socks once again, as he arrived at spring training a little early this year.

And the Yankee slugger showed off those skills that he's turned into an artform these days — no, not hitting homers, but dodging specifics about using performance-enhancing drugs.

"No mistake that I made has any good answer. Or no justification. It's unexplainable. And that's on me. I've dug a big hole for myself and paid a price," Rodriquez said.

But there's no denying it. A-Rod is back, and, unless the minimum $61 million the Yankees owe him over the next three seasons suddenly vanishes, he'll be sporting the pinstripes in some capacity.

"Major League Baseball today was like a bulldozer in punishing the superstar Alex Rodriguez and a dozen other ball players," CNN's Wolf Blitzer said.

A-Rod returns to the field after serving a suspension for the entire 2014 season — the longest drug suspension in MLB history.

But all the focus went to the only remaining poster child of baseball's steroid era, who had admitted to doping once before in 2009 and lied about it — twice.

"I did take a banned substance, and for that I am very sorry," Rodriguez said.

A-Rod did just about everything in his power to avoid suspension in 2014: denied the allegations, reportedly tried to impede the MLB's investigation and appealed the ruling. (Video via Tampa Bay Times)

All the while, both his reputation and body took hits as he continued to play. At one point, Red Sox pitcher Ryan Dempster beaned him in what appeared to be a response to A-Rod's actions.

"Whether you like me or hate me, that's just, what's wrong is wrong. That's unprofessional and silly," Rodriguez said.

Pulitzer Prize-winning writer J.R. Moehringer chronicled A-Rod's journey back to baseball in a beautifully crafted ESPN article that deserves to be read in full.

One excerpt reads: "Alex Rodriguez has become the steroid era's Lord Voldemort. Ryan Braun? Won an MVP, got busted for steroids, twice, called the tester an anti-Semite, lied his testes off, made chumps of his best friends, including Aaron Rodgers, and still doesn't inspire a scintilla of the ill will that follows Rodriguez around like a nuclear cloud."

So, needless to say, when A-Rod delivered a handwritten apology to absolve his transgressions before re-emerging on the diamond, it kind of fell on deaf ears.

"He is a liar. He is a professional liar. ... There is not an ounce of sincerity in anything that he does," ESPN's Tony Kornheiser said.

"If A-Rod is still a Yankee by the end of this season, I, for one, will be surprised. At some point, enough becomes enough," WNYW's Russ Salzberg said.

"He's stupid. ... I don't care. ... He does not care about you. If you got throat cancer tomorrow, he'd still enjoy his coffee and watch his soap operas," a Fox News contributor said.

But A-Rod still has supporters. And, whether he's despised or not, fans across the country will want to see if the 20-year veteran can bounce back despite all the adversity, including issues outside of performance-enhancing drugs.

The soon-to-be 40-year-old is also battling Father Time. He's sustained numerous injuries the past few seasons, casting doubt on how productive he can be moving forward.

Most notable are A-Rod's two recent hip surgeries, which could be affecting his swing. It might be one of the reasons he has trouble fighting off inside fastballs. It's pretty much his kryptonite, and just about every pitcher in the league knows it.

And the stats don't lie. His on-base-plus-slugging percentage, an advanced baseball metric, has been slowly dwindling since his first hip surgery in 2009.

As it stands, A-Rod is currently only six home runs shy of tying Willie Mays on the all-time list, and he's set to earn multi-million-dollar milestone bonuses the further he climbs.

But the Yankees reportedly don't plan on paying up if that happens. One source told the New York Daily News the team believes its off the hook because he violated baseball's drug policy.

This all sets up what's likely to be a tension-filled season between A-Rod, baseball fans and the Yankees organization whether he's able to produce or not. But, at this point, when it comes to A-Rod, would we really have it any other way?

This video includes Getty Images and music from Chris Zabriskie / CC BY 3.0.