'A Rigged Game': Why The Libertarian Candidate Is Suing To Debate 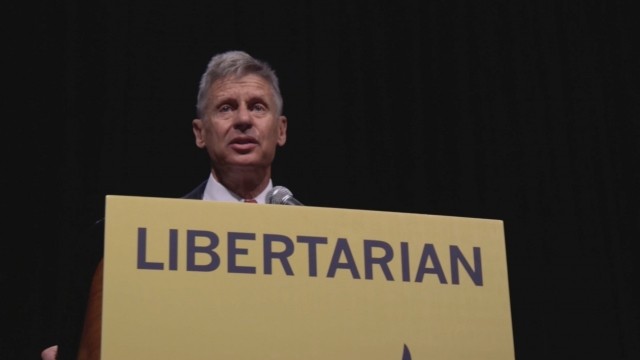 SMS
'A Rigged Game': Why The Libertarian Candidate Is Suing To Debate
By Kate Grumke
By Kate Grumke
June 22, 2016
Two third-party candidates are suing to try to get onto the presidential debate stage — they're using anti-monopoly laws to do it.
SHOW TRANSCRIPT

This is a sight you probably won't see in the general election: third-party presidential candidates in a televised debate.

That's because it's really hard for third-party candidates to qualify for general election presidential debates.

So hard, in fact, the Libertarian Party and the Green Party are actually suing the Commission on Presidential Debates for antitrust.

The lawsuit is a new tactic for the parties, but the fight to be included in the debates isn't.

In 2012, Green Party candidate Jill Stein was actually arrested while protesting outside the debate between Mitt Romney and Barack Obama.

So why is it so hard for third-party candidates to get into these debates?

Well, in 1987, the Democratic and Republican parties created the Commission on Presidential Debates, and starting with the 2000 election, the commission made a rule that candidates have to get at least 15 percent in five national polls to be in the debate.

The co-chairman of the CPD told The Hill that the requirement has held up to other lawsuits because it is objective and non-partisan.

But 15 percent in national polls is a pretty high benchmark for a third-party candidate like Libertarian Gary Johnson.

And that sucks for him because debates are pretty important for exposure.

The last time a third-party candidate was in a televised presidential debate, it was Ross Perot in 1992.

He finished with almost 19 percent of the vote.

"Eighty percent of Americans say they want a third choice.

Since Johnson was elected the nominee of the Libertarian Party, 21 national polls have included his name, while 47 have not.

"If my name were in all of the polls starting today, I guarantee you I would be at 15 percent," Johnson said.

The highest he's gotten so far is 12 percent.

But the Libertarian Party would rather the debate commission included candidates who are on the ballot in enough states that they could potentially win more than half of the electoral college.

"What I would like to see is that if you are on the ballot in enough states that you should be on the debate stage," Johnson.

So that would mean being on the ballot in about half of the states, which takes a lot of organization and money.

In 2012, only four candidates would have qualified: Barack Obama, Mitt Romney, Johnson and Stein.

"The challenge for any third party is, how do you even get on the ballot? … It costs us so much money to do that that all of our resources are spent getting on the ballot, depriving us of the ability to leverage that same money to get our message out," former Libertarian Chair Geoff Neale said.

The lawsuit is still in the courts. If a ruling doesn't come down before the presidential debates, Johnson told Newsy the goal is to be included in polls to try to get to 15 percent.

This video includes clips from Democracy Now, C-SPAN, The University of Virginia and images from Getty Images.