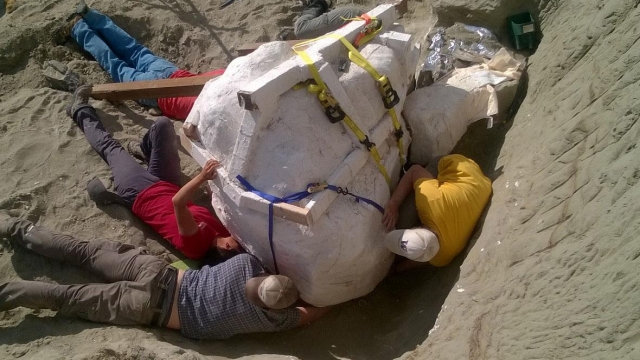 SMS
A Rare, Nearly Complete T. Rex Skull Just Arrived In Seattle
By Briana Koeneman
By Briana Koeneman
August 19, 2016
A team of paleontologists discovered the T. rex skull and some of its other bones in the Hell Creek Formation in Montana.
SHOW TRANSCRIPT

Paleontologists have unearthed one of the most complete Tyrannosaurus rex skulls ever discovered.

And the rare find is going to call Seattle's Burke Museum home.

A team of paleontologists with the museum discovered the T. rex skull and other bones in the Hell Creek Formation in Montana, which is famous for its fossil sites.

It all started back in May 2015 when two volunteers noticed pieces of fossilized bone sticking out of the hillside.

And after further excavation, the team uncovered the rare skull, which is about 4 feet long and weighs a whopping 2,500 pounds, including its protective plaster jacket.

The paleontologists also dug up the 66.3 million-year-old dinosaur's vertebrae, ribs, hips and lower jaw bones — about 20 percent of its remains.

And they named the T. rex after the men who found it: Jason Love and Luke Tufts.

"We just got lucky, and the place we were going just happened to be this boulder with some bones sticking out of it," Tufts told NWCN.

The skull will be shown at the Burke Museum for a few weeks, starting Saturday.

Then, paleontologists plan to carefully remove the rock still surrounding the fossil and put it back on display in the New Burke Museum when it opens in 2019.