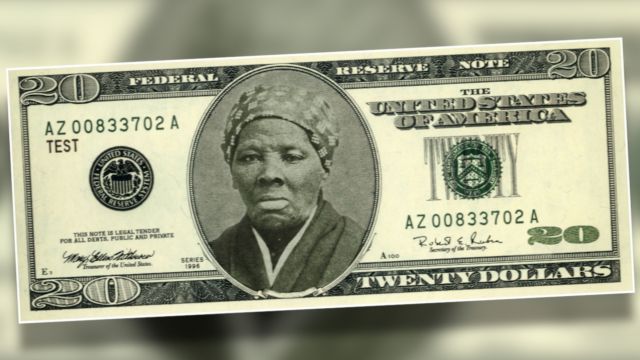 SMS
A Non-President Abolitionist Knocked A White Slave Owner Off The $20
By Matt Moreno
By Matt Moreno
April 20, 2016
Starting in 2020, Harriet Tubman is heading to the front of the $20 bill, replacing the seventh president of the United States, Andrew Jackson.
SHOW TRANSCRIPT

Harriet Tubman is heading to the $20 bill.

The U.S. Treasury Department announced Wednesday that the woman credited with saving hundreds of slaves will replace former President Andrew Jackson on the front of the $20 bill.

The U.S. Treasury Department originally said changes would occur on the $10 bill with Alexander Hamilton in 2022.  But it appears Hamilton is going to stay, and Jackson will be kicked off the face of the bill starting in 2020 — 100 years after women first got the legal right to vote. Jackson will be moved to the back of the bill.

There's been a strong push for a woman on a U.S. bill in the last year or so, with a petition reaching President Obama. Over 600,000 people cast votes and decided Tubman was the best choice of 15 candidates.

In September, the large field of Republican presidential candidates were asked which woman they'd suggest for the $10 bill. None of the candidates suggested Tubman.

Tubman will be one of the few non-presidents to be placed on U.S. bills.

This video includes a clip from Women on 20s and images from the Library of Congress.

Correction: An earlier version of this video incorrectly said Andrew Jackson is being moved off the $20 bill entirely. His image will be moved to the back of the bill. The video also incorrectly said Harriet Tubman is the second non-president on U.S. bills. The video has been updated.