A No-Fly Zone In Syria: Is It The Least Bad Option? 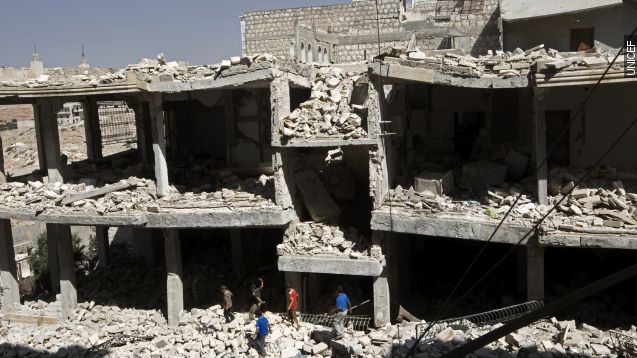 For four years, Bashar al-Assad has been slaughtering his people. And for four years, U.S. policymakers have considered this as a solution. (Video via Syrian Civil Defense)

"The no-fly zone is not some type of silver bullet," Ben Rhodes said during a 2013 news conference.

What exactly is a no-fly zone? As the name suggests, it’s designated airspace that’s off limits to an adversary’s air force. In other words, a no-fly zone is designed to prevent military aircraft from targeting civilians. (Video via Darayaa Media Center)

Violating aircraft are forced to land, and in some cases, are shot down. (Video via Darayaa Media Center)

No-fly zones have been around since the '90s, and were first used in Iraq after the Gulf War.

Not long after, the United Nations set up one over Bosnia to prevent Serbian attacks on civilians.

And in Libya, the U.N. declared a no-fly zone in 2011 to ground the regime’s military aircraft.

There's a lot of debate over how effective these were. While they succeeded in limiting air attacks, it's not as though they prevented killings on the ground — most notably the Srebrenica massacre in Bosnia that killed 8,000 people. (Video via United Nations)

But in the case of Syria, supporters argue a no-fly zone could have a major impact. Assad has total control of the skies, and his forces routinely drop barrel bombs on civilian neighborhoods. (Video via Darayaa Media Center)

There's also an argument to be made that taking away Assad’s air power could pressure him to come to the negotiating table. (Video via Presidency of the Syrian Arab Republic)

But it's not that simple, according to the White House.

"In Syria, when you have a situation where regime forces are intermingled with opposition forces, they're fighting in some instances block by block in cities — that’s not a problem you can solve from the air," Rhodes said in 2013.

Political realities play into this as well. If, for example, a U.S. warplane were shot down, any sort of recovery mission would require the U.S. to send in boots on the ground.

Whether it's a no-fly zone or not, no one in Washington seems to agree on a solution in Syria. Question is, how many more of Assad's barrel bombs have to drop before they do? (Video via Syrian Civil Defense)