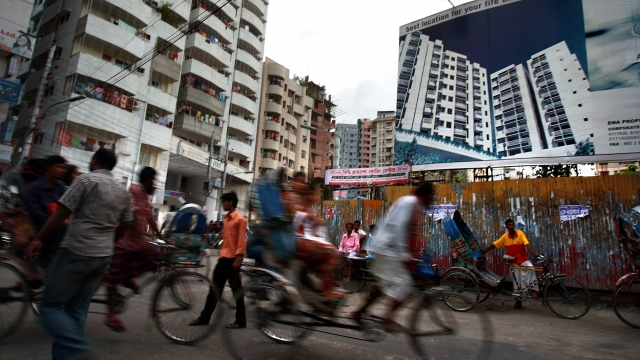 SMS
A Newly Discovered Fault Line Could Put 100 Million People In Danger
By Katie Link
By Katie Link
July 11, 2016
New GPS data indicates a megaquake — an earthquake with a magnitude 8.2 to 9.0 — could strike the region.
SHOW TRANSCRIPT

This was the aftermath of a 9.0 magnitude earthquake that shook Japan back in 2011.

That quake and subsequent tsunami killed 22,000 people and caused $300 billion in damage. Now, experts warn this could happen again but in a different part of the world.

Researchers have identified a hidden fault beneath Bangladesh and parts of east India and Myanmar.

New GPS data indicates a megaquake — an earthquake with a magnitude 8.2 to 9.0 — could strike the region.

SEE MORE: A New App Wants To Collect Earthquake Data From Your Phone

An earthquake that strong would be incredibly devastating. According to Live Science, "researchers estimate about 140 million people live within 60 miles of the fault."

Most of those people are in the eastern outskirts of Dhaka, Bangladesh. It wasn't long ago that The World Bank labeled Dhaka the fastest-growing city in the world. The problem is, the rapid development needed to keep up with growth isn't necessarily the safest.

One of the researchers told Live Science: "I've seen them pumping sand to build up the ground level to build a 20-story building. If there’s an earthquake [that ground is] going to liquefy and the building is just going to fall over."

Another researcher told National Geographic, "Dhaka's basically like building a city on a bowl of Jell-O."

The caveat here, and in lots of other earthquake studies, is it's really hard to predict when the fault may trigger a quake.

A seismologist in Dhaka told National Geographic they are preparing for an earthquake, though the process is slow.