A New Obamacare Lawsuit Is Picking Up Steam 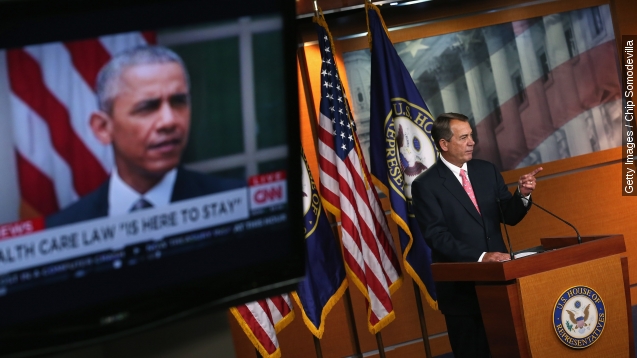 SMS
A New Obamacare Lawsuit Is Picking Up Steam
By Steven Sparkman
By Steven Sparkman
September 10, 2015
The House's lawsuit against the Obama administration was once seen as a long shot, but it passed a major hurdle Wednesday and will get a full hearing.
SHOW TRANSCRIPT

There's another legal challenge to the Affordable Care Act, although opinion is still split on its chances of actually damaging the ACA. (Video via Healthcare.gov)

A federal judge has given the go-ahead for the House of Representatives to sue the Obama administration over Obamacare.

The House voted to sue the administration last year. It claims the White House spent money implementing the healthcare law it didn't have Congressional permission to spend. (Video via C-SPAN)

House Republicans have framed the suit as a constitutional issue.

"This isn't about Republicans and Democrats. This is about defending the Constitution that we swore an oath to uphold," Speaker John Boehner said after the vote.

They argue the White House actually violated the "power of the purse." Article I of the Constitution says, "No money shall be drawn from the Treasury" without Congressional approval.

You might be more familiar with the case from its other main argument: that it was unconstitutional for President Obama to delay part of the law for an extra year — specifically, the mandate for employers to provide insurance. That argument seems to have been downplayed as the case moved forward.

From the start, analysts haven't given the lawsuit great odds.

"I'm not sure this is the right tool in the toolbox. It certainly feels like a gamble," the National Review's Jim Geraghty told Fox News.

Others have noted how bizarre the case seems.

"Something that's very unusual: we've seen members or groups of members try to sue a president before, but not the entire House or Senate," CBS's Nancy Cordes said.

And, of course, President Obama mocked the lawsuit as an ineffective waste of time.

"You know who's paying for this suit they're going to file? You. You're paying for it. And it's estimated that, by the time the thing was done, I would have already left office," Obama said.

Basically, no one thought it was likely that the House would be able to prove it had standing to bring the lawsuit.

The conservative Heritage Foundation said, "Such a lawsuit would require the courts to police the limits of the political branches' powers," and that getting the courts to do that by granting standing "may prove to be an insurmountable hurdle."

But that's exactly what's happened. The case will be heard by the same federal judge later on this fall, but even with the hard part over with, analysts are still divided on whether a win would even hurt Obamacare very much.

This video includes an image from Getty Images and the U.S. National Archives.