A New Low? U.S.-Israeli Spats Through The Years 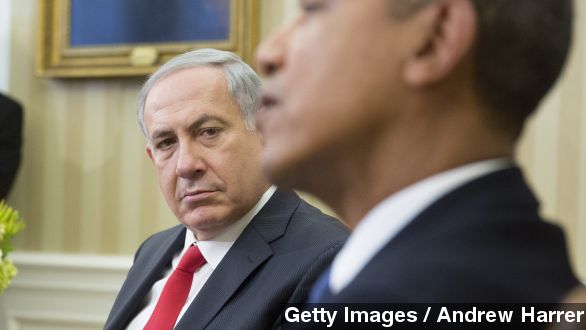 It seems there's only one way to describe Benjamin Netanyahu's upcoming speech to Congress.

"This is a low point in U.S.-Israeli relations." (Video via MSNBC)

"This seems to be a low point." (Video via Fox News)

"A low point in the relationship." (Video via MSNBC)

But rifts in that relationship aren't unheard of. Here’s a look at some previous rough patches between the two allies.

"A new Middle East crisis arises as President Nasser of Egypt tells a cheering crowd in Alexandria that Egypt has seized the internationally owned Suez canal." (Video via Universal Studios)

In 1956, Israel saw Egypt as a threat to its security. Without informing the U.S., Israeli forces invaded Egypt, seizing control of the Sinai Peninsula. (Video via U.S. National Archives)

“We believe these actions to have been taken in error,” President Eisenhower said.

Concerned the conflict would destabilize the region, President Dwight D. Eisenhower condemned the invasion. He pressured Israel to withdraw its troops, threatening to cut off private donations and military assistance. (Video via U.S. National Archives)

"Jonathan Pollard pleaded guilty this week to spying for Israel," said a reporter for CBS News. (Video via CBS)

Seen here in surveillance video, it's estimated Pollard stole as many as 1 million classified documents in exchange for cash payments from Israel. (Video via NBC)

According to declassified CIA documents, he leaked information on Arab nuclear intelligence and weaponry.

He received an unprecedented life sentence in prison for spying. (Video via Channel 2)

The Reagan administration demanded Israel come clean, but it wasn’t until 1998 that Israel admitted Pollard was one of its spies. (Video via U.S. National Archives)

His imprisonment remains a sore spot between the U.S. and Israel, with the Israeli government regularly calling for his release. (Video via Office of Prime Minister Benjamin Netanyahu)

The relationship took another hit in 1990.

"Everybody over there should know that the telephone number is 1-202-456-1414. When you're serious about peace, call us," former Secretary of State James Baker said during a House testimony in 1990.

Not only did then-Secretary of State James Baker trigger some 8,000 phone calls to the White House switchboard with those comments, it was an embarrassment for then-Israeli Prime Minister Yitzhak Shamir, who Baker accused of dragging his feet on the Palestinian-Israeli peace process.(Video via YouTube / Tal Shalev, NBC)

But a bigger blow to the relationship came a year later, when the Bush administration refused to provide $10 billion in loan guarantees unless Israel halted its settlement construction in the Palestinian territories.

It was an effective tactic. Months later, Israel announced a settlement freeze.

Today, the issue of settlement construction remains a big sticking point in U.S. efforts to negotiate a peace plan. (Video via U.S. Department of State)

This video includes images from gnuckx / CC BY 2.0 and U.S. Navy and music from Chris Zabriskie / CC BY 4.0.