A Man Says His Math Equation Sparked A Terrorism Scare 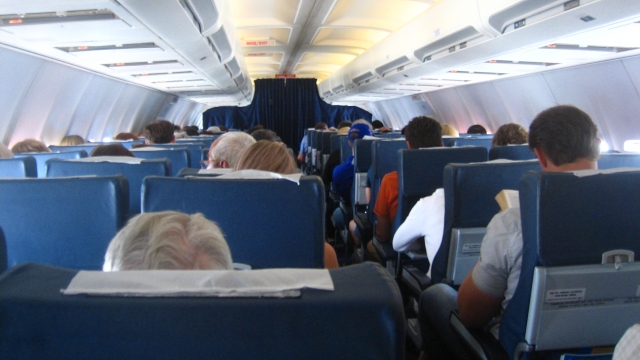 SMS
A Man Says His Math Equation Sparked A Terrorism Scare
By Samantha Crook
By Samantha Crook
May 7, 2016
An economics professor at the University of Pennsylvania says his flight was delayed after his seatmate grew worried about his writing.
SHOW TRANSCRIPT

Advanced math generally doesn't rank high on the list of potential reasons a flight can be delayed. But on Thursday, a flight was delayed after a passenger was found writing what turned out to be a math equation.

A woman on the American Airlines flight reportedly had concerns about the man sitting next to her and told crew members she was worried about her seatmate's behavior.

An economics professor at the University of Pennsylvania says he was the man involved in the more than 2-hour-long delay. Guido Menzio was traveling to give a talk about — you guessed it — math and working on an equation while waiting for takeoff.

Menzio told The Washington Post he suspected xenophobia was part of the problem. Menzio is Italian and suggested his features might have been part of the woman's concerns. He admits he did shy away from small talk with the woman but says it was because he was engrossed in his work.

Menzio said that after the woman voiced her concerns, he was told he was suspected of terrorism because of the "strange things" he was writing in his notepad.

Despite the inconvenience, he told The Washington Post he was "treated respectfully." But, like a true man of numbers, Menzio said what really got to him was that the airline didn't "collect information efficiently."

This video includes an image from Iwan Gabovitch / CC BY 2.0 and clips from American Airlines, University of Pennsylvania and TSA.