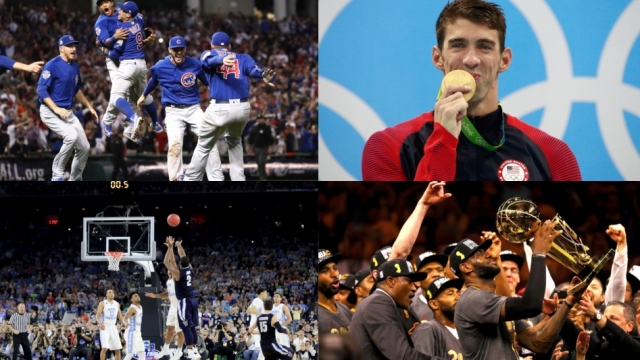 SMS
2016 Was One Of The Wildest (And Most Memorable) Years In Sports
By Grant Suneson
By Grant Suneson
December 13, 2016
World records, decades-long title droughts and goat-related curses all came tumbling down.
SHOW TRANSCRIPT

2016 gave us some amazing sports moments many of us never thought we'd get to see.

The Chicago Cubs finally put 108 years of futility behind them and captured their third title in franchise history.

The Cubbies had a comeback for the ages, overcoming the Cleveland Indians 3-1 series lead thanks to some timely hitting and an even more timely rain delay in game seven.

Don't feel too bad for Cleveland fans, though. The city nabbed its first title in more than 50 years after LeBron James and the Cavaliers avenged their championship loss to the Golden State Warriors the year before.

The college basketball season ended with a bang when Kris Jenkins buried a buzzer-beating three-pointer to give the Villanova Wildcats their first basketball championship in 30 years. Senior guard Ryan Arcidiacono was named the tournament's most outstanding player.

Despite concerns it could be a disaster, the 2016 Rio de Janeiro Summer Olympics went well, especially for Americans.

Michael Phelps ended his time in the pool on top, winning five more gold medals and pushing his record total to 23 golds and 28 overall. And Katie Ledecky proved the future of U.S. swimming is in good hands.

But some will look back on the 2016 Olympics and just remember how Ryan Lochte got drunk and lied about being robbed.

The U.S. won 46 gold medals and 121 medals overall. China came in second with 70. Though it definitely helped both countries that nearly a third of Russia's athletes were banned for doping.