A Look Back On President Obama's Musical Legacy 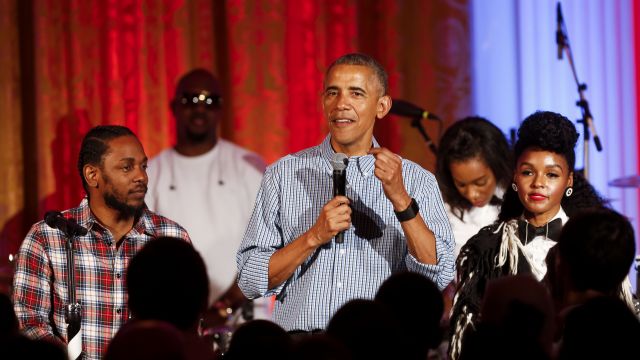 SMS
A Look Back On President Obama's Musical Legacy
By Tyler Adkisson
By Tyler Adkisson
October 31, 2016
While in the White House, Barack Obama has been very open about his love for music — and it's made for some of his best moments as president.
SHOW TRANSCRIPT

President Obama is leaving a musical legacy, even if he can't belt it like Al Green.

"I'm so in love ..." President Obama sang at Harlem's Apollo Theater. "Don't worry, Rev. I cannot sing like you. But I just wanted to show my appreciation."

He's never been shy about his wide-ranging music tastes.

"But when I look at who's breaking new ground, Kendrick and Chance — those guys are doing just amazing work, and they're just wonderful young men," Obama said recently on SiriusXM's "Sway in the Morning."

But sometimes, he needs musicians to twist his arm to show his performance chops.

"Willie [Nelson] says I'm gonna have to sing with him, so I'll try it out," Obama said to a crowd at "A Salute to the Troops: In Performance at the White House."

"I heard you — I heard you sang with Al Green, so you started something — you gotta keep it up now," Buddy Guy told Obama at the White House.

"It must be a little nerve-wracking. I hope I don't drop these cards," Obama said to Hamilton creator Lin-Manuel Miranda.

"Alright, drop the beat," Obama said to the drummer on site.

"Opportunity knocks, and I can't stop. I'm here with the president and my pops, and yo, the mic drops," Miranda rapped to Obama.

"How good was that?" Obama asked Miranda.