A Look Back At Key Moments In The U.S.-Cuba Relationship 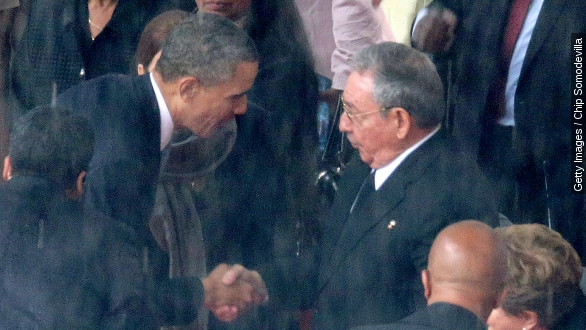 Thirty-five countries will be represented when the Summit of the Americas opens on Friday, but all the attention's on two.

Ahead of President Obama's expected meeting with Raul Castro, here's a look back at some big moments in the U.S.-Cuba relationship.

When the U.S. ended its occupation of the island a few years later, Cuba agreed to lease Gitmo for use as an American naval base.

"From his stronghold in the mountains, Cuba's Fidel Castro has emerged triumphant after two years of guerrilla warfare against the Batista regime." (Video via Universal Studios)

Just months after his victory, Fidel Castro traveled to the U.S. on an unofficial visit.

"The American people I think are good people," Castro said.

He was snubbed by President Dwight D. Eisenhower, but did meet with then-Vice President Richard Nixon. Nixon later wrote that the U.S. had little choice but to "at least to try to orient [Castro] in the right direction."

"The assault has begun on the dictatorship of Fidel Castro." (Video via Universal Studios)

Concerned by the Castro government, President Kennedy signed off on the now-infamous CIA-sponsored Bay of Pigs operation designed to overthrow the Cuban leader. (Video via John F. Kennedy Presidential Library)

The botched invasion, which left over 100 Cuban exiles dead, only strengthened Castro's hand.

On Thanksgiving Day, 1999, 5-year-old Elian Gonzalez was found tied to an inner tube floating off the coast of Florida —  the only survivor in a group of Cuban refugees.

The boy became the subject of an international custody battle involving his father in Cuba and his relatives in Miami. Ultimately, the U.S. Supreme Court sided with his father. (Video via CBS)

It was the handshake seen around the world.

But it angered many Republican lawmakers. "When the leader of the free world shakes the bloody hand of a ruthless dictator like Raúl Castro, it becomes a propaganda coup for the tyrant," Rep. Ileana Ros-Lehtinen said.

When the two leaders see each again this weekend, they'll have plenty to discuss — including Cuba's current listing by the U.S. as a state sponsor of terror.