A Look At Trump And Obama's Strained Past 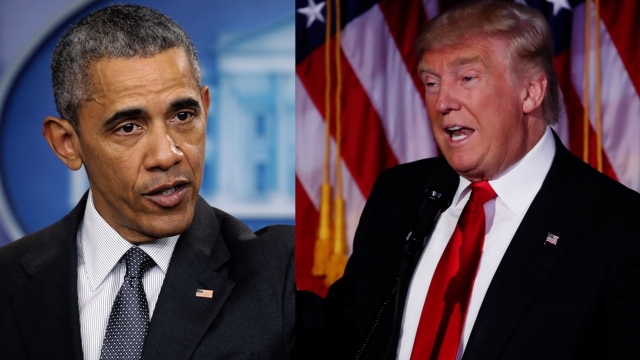 "It is no secret that the president-elect and I have some pretty significant differences," President Obama said during a statement in the Rose Garden on Wednesday.

Donald Trump told NBC's "Today" show in 2011, "Three weeks ago when I started, I thought he was probably born in this country, and now I really have a much bigger doubt than I did before."

"No one is prouder to put this birth certificate matter to rest than the Donald, and that's because he can finally get back to focusing on the issues that matter. Like, did we fake the moon landing?" Obama joked during the 2011 White House Correspondents' Dinner.

CNN's Anderson Cooper asked Trump in 2015, "Do you accept that President Obama was born in the United States, is not Muslim?"

"No, I don't know. I really don't know," Trump responded, saying he'd rather talk about issues like jobs and the economy.

Obama told attendees of the 2016 White House Correspondents' Dinner, "There's one area where Donald's experience could be invaluable — and that's closing Guantanamo. Because Trump knows a thing or two about running waterfront properties into the ground."

"I think he's the worst president, maybe in the history of our country. I think he's been a disaster," Trump told Fox News's Bill O'Reilly in August.

"Donald Trump is temperamentally unfit to be commander in chief," Obama said during a Hillary Clinton rally in North Carolina.

But now, they need to come together for a peaceful transition of power.

"It is time for us to come together as one united people," Trump said during his election victory speech early Wednesday.

Obama reiterated that point Wednesday: "We are now all rooting for his success in uniting and leading the country."