A Look At The Zumwalt, The US Navy's Newest Destroyer 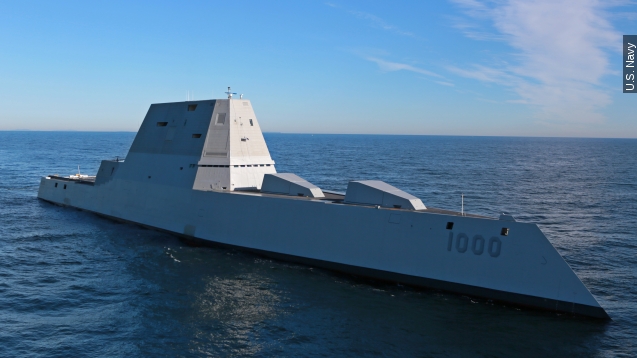 SMS
A Look At The Zumwalt, The US Navy's Newest Destroyer
By Evan Thomas
By Evan Thomas
December 8, 2015
The Zumwalt-class destroyer has been decades in the making, but its cutting-edge technology turned out to be very expensive.
SHOW TRANSCRIPT

The U.S Navy is running sea tests on its latest destroyer. (Video via U.S. Navy)

The Zumwalt is the first of the new DDG-1000 destroyers. It's designed for surface warfare, anti-aircraft and naval fire support.

In 1995, research started on what would become the Zumwalt class.

A low-profile hull makes the ship harder to detect on radar.

Its power system is future-proof. Eventually, it will run the railguns and lasers the Navy is testing. (Video via Raytheon, Department of Defense, U.S. Navy)

The program's $13 billion budget was supposed to support 32 destroyers. (Video via U.S. Navy)

But between research costs and budget cuts, the Zumwalt class is currently down to three hulls.

Zumwalt, the first of three, is scheduled to receive U.S.S. designation and enter active service sometime in 2016. (Video via U.S. Navy)