A Look At How Attractiveness Affects The Workplace 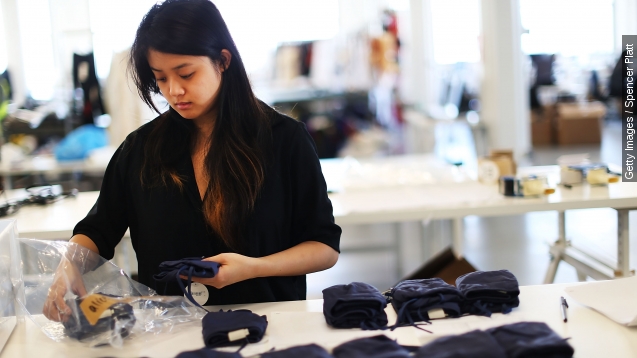 It’s often said beauty is in the eye of the beholder. And it’s true: We all have different opinions about what’s beautiful.

But it’s proven time and time again that people who are tall, physically fit and facially symmetrical are oftentimes more successful than others in the workplace.

In 2010, Newsweek surveyed more than 1,000 people, some of whom were hiring managers, and discovered 72 percent believed being considered attractive was an advantage for a woman who’s interviewing for a job.

"I think that a manager at work wants to know that you care enough about your appearance to be able to project professionalism on the job," Cindi Leive, the editor-in-chief of Glamour, told NBC.

And after the interviewee gets the job?

Sixty percent of the hiring managers Newsweek polled thought women who wore figure-flattering clothing at work might have an advantage. (Video via White House Black Market)

And in another study, so-called attractive people were found to make as much as 11-15 percent more than their less-attractive co-workers.

But it might be that we can’t help ourselves when responding favorably to people we think are attractive.

Dr. Gordon Patzer, who studies attractiveness, told CNN, "Controlled studies show people go out of their way to help attractive people — of the same and opposite sex — because they want to be liked and accepted by good-looking people."

It’s actually related to a type of cognitive bias called the Halo Effect, a term first used in 1920.

A variation of the Halo Effect says people will often think attractive individuals are smarter, funnier, kinder and even more athletic than average-looking people.

Still, good looks can sometimes be a detriment for women.

"I’m sorry, are you here to see me?" asks a character in the film "Legally Blonde."

"You got into Harvard Law?" he asks.

Crudely referred to as the "bimbo effect," good-looking women might find they have to work hard to prove their competence, especially when working in male-dominated settings.

While it’s been acknowledged these beauty biases exist in our culture, not a whole lot is being done to fight them.

Only a few U.S. cities have protections against discrimination due to personal or physical appearance, including Washington, D.C. and Madison, Wisconsin.

In 2011, an economics professor wrote in a New York Times article it might not be difficult to come up with classes of attractiveness to make an anti-discrimination law, but getting people to classify themselves as "not-attractive" might difficult. (Video via The University of Texas at Austin)

"'Ugliness' is not a personal trait that many people choose to embrace; those whom we classify as protected might not be willing to admit that they are ugly," Daniel Hamermesh wrote.

Similar to contestants auditioning on NBC’s "The Voice," some companies are implementing blind interviews in their hiring process so applicants can be judged solely on job skills.

Despite attempts to fix workplace biases, overcoming perceptions of beauty as a whole might require people recognizing they do judge others based on looks.

A writer for The Boston Globe summed it up perfectly: "We do ourselves a disservice by saying looks don’t matter in society. … That’s counterproductive. We need to say, Looks do matter."

This video includes images from Getty Images and Francisco Osorio / CC BY 2.0.