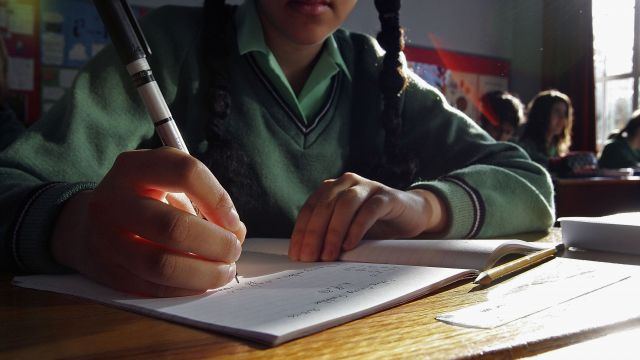 SMS
A Kid's Mindset Is Just As Powerful As Money When It Comes To College
By Jamal Andress
By Jamal Andress
March 9, 2016
Parents' income is one of the best ways to predict kids' access to college, but helping young people believe they can attend also has a big effect.
SHOW TRANSCRIPT

"A child with as little as $500 in a 529 [plan] is two to three times more likely to go to college than a child without. ... That's not even a semester of books," Sol Anderson said.

Sol Anderson is vice president of LIFT Chicago. LIFT works with parents of young children who are struggling with poverty. One major goal of Anderson's is giving more people access to college.

"One of the things we focus on at LIFT is this idea that hope is a powerful thing — and not in a warm and fuzzy sense but in an actual evidence-based sense — that people who believe they can do something are more likely to do so,” Anderson said.

Statistically, parents' income is one of the best ways to predict if a kid will graduate from college, but a study suggests helping that kid believe he or she can do it might combat the trend.

Washington University researchers found putting just a small amount of money (even less than $1) in a kid's college savings account can have a major impact, making them three times more likely to enroll in college than a child with no savings.

"People living below the poverty line … face very real choices about having a place to sleep and having food to eat. ... So you put that amount of money and symbolically that shows a child, 'I'm invested in you, I believe in your success, and I'm gonna put this money away specifically for you,'" Sol Anderson said.