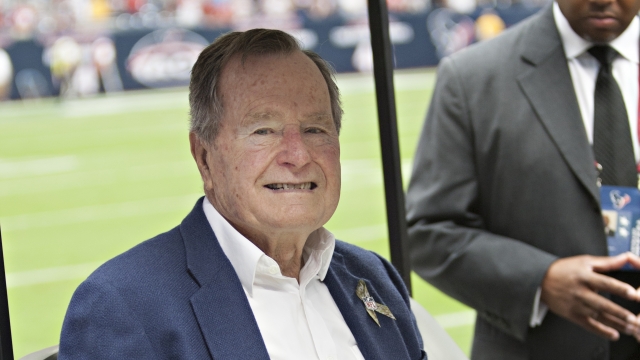 Is former President George H.W. Bush breaking with his party and voting for Hillary Clinton?

According to a Kennedy, he is.

Former Maryland Lt. Gov. Kathleen Hartington Kennedy Townsend posted a photo on Facebook of herself with the 41st president. The caption on the photo said, "The President told me he's voting for Hillary!!"

In a response to Politico, which first reported the story, Bush's spokesperson said: "The vote President Bush will cast as a private citizen in some 50 days will be just that: a private vote cast in some 50 days. He is not commenting on the presidential race in the interim."

Whether Bush votes for Clinton or not, his silence during the race has been noted. As The Texas Tribune points out, Bush has publicly supported the Republican nominee in the past five presidential elections.

His spokesperson has said Bush is 92 and retired from politics. But from a man who went skydiving just two years ago, it's hard for some to believe his reasoning isn't more personal.

"I am sick and tired of him going after my family. My dad is the greatest man alive in my mind. While Donald Trump was building a reality TV show, my brother was building a security apparatus to keep us safe. I'm proud of what he did," Jeb Bush said during a debate.

Trump responded, "The World Trade Center came down during your brother's reign."

Bush's son, former Florida Gov. Jeb Bush, dropped out of the presidential race in February and has yet to endorse Republican nominee Donald Trump. Former President George W. Bush hasn't, either, and gave a speech some interpreted as criticism of Trump's policies at an event last month.

SEE MORE: Jeb Bush Still Won't Back Donald Trump, But His Son Will

All three Bushes skipped the Republican National Convention. And some members of 41 and 43's administrations have already announced their support for Clinton.

Republican National Committee Chairman Reince Priebus told "Face The Nation" on Sunday that Republicans who ran in the primary and pledged to back the party's nominee need to make good on that pledge by supporting Trump. Jeb Bush, Sen. Ted Cruz and Ohio Gov. John Kasich haven't done that.

"Would the party itself penalize somebody who does not make good on the pledge that they made to support the party nominee?" host John Dickerson asked.

"I think these are things that our party is going to look at in the process. And I think people who gave us their word, used information from the RNC, should be on board," Priebus responded.

It didn't take long for Kasich's chief strategist to fire back, saying, "He will not be bullied by a Kenosha political operative that is unable to stand up for core principles or beliefs."