A History Of Our Weirdest Federal Holiday: Presidents Day 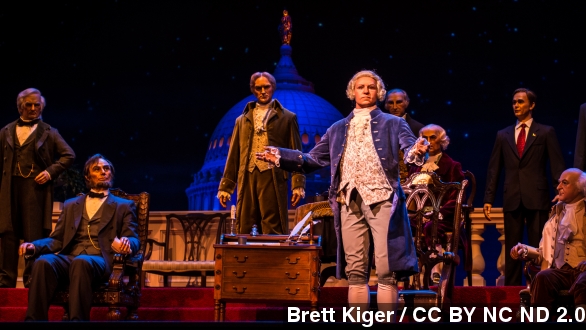 Presidents Day, or Washington's Birthday as it's officially known, is a peculiar little holiday.

But you used to — as this picture of a trolley car decked out for the holiday from LA's Metro Transportation Research Library and Archive shows, Washington's Birthday was an occasion for celebration.

As the History Channel points out, by the time president Rutherford B. Hayes signed a bill officially recognizing the holiday into law, it had already been observed unofficially since Washington's death in 1799.

At that time, Washington's Birthday was observed on, well, Washington's birthday, Feb. 22, instead of on the third Monday of February. (Video via Alexandrianews.org)

The reason for the switch? Another president, Lyndon B. Johnson, who signed the Uniform Holiday Bill in 1968, which moved Washington's Birthday, along with Memorial Day and Veterans Day. (Video via U.S. National Archives)

That bill aimed to give federal employees at least five three-day weekends a year, but it also created the possibility that we'd be celebrating Washington's birthday as much as seven days before his actual birthday.

And that may have opened the door to Presidents — plural — Day, with other February birthday presidents, like Abraham Lincoln, edging in on Washington's turf.

In fact, this year, Washington's Birthday actually fell closer to Lincoln's, on February 12, than Washington's, although Lincoln's Birthday is actually its own holiday in some states. (Video via Touchstone Pictures / 'Lincoln')

As for why the holiday is associated with sales, for cars in particular? Well, it goes back to bicycles. (Video via Tony Group)

The Atlantic traces that phenomenon back to the bicycle craze days of the late 1800s when the holiday was established, when companies started bike sales events, which later gave way to motorcycle and, ultimately, car sales.

So no matter how you choose to celebrate, or not celebrate Presidents Day, or Washington's Birthday, just know there's no wrong way because, officially, there's not really a right way either.