A Guide To Dodging Gaffes, By Donald Trump 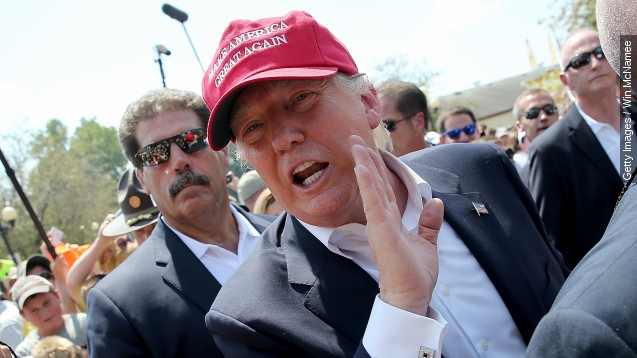 A Guide to Dodging Gaffes:

"He's not a war hero. He's a war hero because he was captured; I like people that weren't captured, OK, I hate to tell you," Trump said of Sen. John McCain.

"When Mexico sends its people, they're not sending their best. They're bringing drugs, they're bringing crime, they're rapists. And some, I assume, are good people," Trump said in his presidential announcement speech."

"Why not say, 'Maybe I went too far,' 'Poor choice of words' or even 'I'm sorry'?" Fox News' Howard Kurtz asked Trump.

"I don't mind apologizing for things, but I can't apologize for the truth. I said tremendous crime is coming across. Everybody knows that's true and it's happening all the time," Trump said, standing by his controversial comments.

"That's an offensive term, people find that hurtful," ABC's Tom Llamas said to Trump about his use of "anchor baby."

"You mean it's not politically correct and yet everybody uses it?" Trump answered.

"Look it up in the dictionary. It's offensive," Llamas snapped back.

"What I say is what I say and, honestly, Megyn, if you don't like it I'm sorry. I've been very nice to you, although I could probably maybe not be based on the way you've treated me, but I wouldn't do that," Trump said.

"She did push you; she pushed a lot of people, but what is it with you and Megyn Kelly?" CNN's Don Lemon asked Trump about his feud with Kelly.

"Well, I just don't respect her as a journalist. I have no respect for her. I don't think she's very good. I think she's highly overrated."

"Negotiating with China, when these people walk in the room, they don't say, 'Oh hello. How's the weather? It's so beautiful outside. How are the Yankees doing?' 'They're doing wonderful; great.' They say, 'We want deal!' "

This video includes images from Getty Images and music from Bensound / CC BY 3.0.