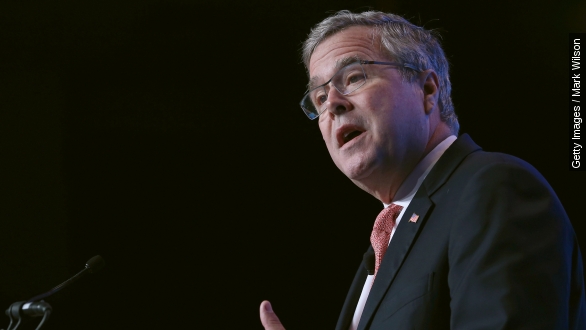 SMS
A GOP Primary Pastime: Knocking The New York Times
By Zach Toombs
By Zach Toombs
April 5, 2015
Jeb Bush, Chris Christie, Ted Cruz and Scott Walker are among the 2016 hopefuls who have gone out of their way to bash the paper of record.
SHOW TRANSCRIPT

2016's GOP contenders want to make one thing clear: they do not read The New York Times.

"I don't care what they write about me in The New York Times," New Jersey Gov. Chris Christie told CPAC. "They can keep it. I don't subscribe, by the way."

"The New York Times and other leftist rags," Texas Sen. Ted Cruz said. "They give their advice to Republicans on who we should nominate."

"I don't read The New York Times, to be honest with you," former Gov. Jeb Bush told Fox News Radio.

Despite all the hate for The New York Times, the paper's latest big scoop actually dug into a Democrat.

And other members of the mainstream press have defended the paper.

"So when a candidate says they ignore The Times, it comes awfully close to sounding like they're proud to be uninformed," CNN's Brian Stelter said.

But ultimately, Republicans taking shots at The New York Times are just taking an easy opportunity to line up with their base. A 2014 Pew study showed most conservatives distrust the paper.