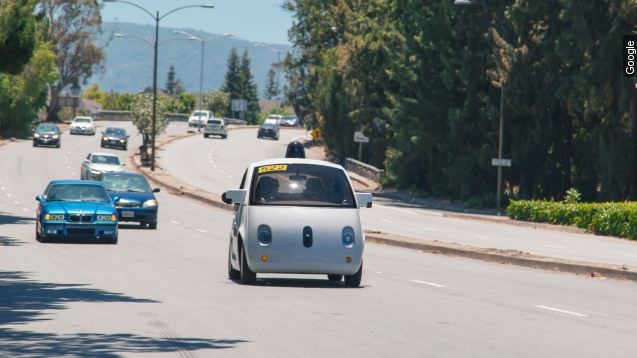 SMS
A Google Self-Driving Car Got Pulled Over For Going Too Slow
By Samantha Crook
By Samantha Crook
November 13, 2015
A Google self-driving car was stopped for driving too slow in California. Still, Google says none of their cars have been ticketed.
SHOW TRANSCRIPT

That's what happened to a Google self-driving car when it was stopped for going 24 mph in a 35 mph zone, according to the Mountain View Police Department. (Video via Google)

There was a passenger in the car, though. And once the officer realized it was self-driving, they took the opportunity to educate the person about impeding traffic. The car was reportedly going slow enough to back up traffic behind it.

The question of driver responsibility — for cars that aren't being driven by drivers — has been a big part of the conversation around autonomous vehicles. And there's still a lot to work out legally.

A writer for Re/code points out, "The question of who gets the ticket if a self-driving car does commit a violation is still pretty gray." For now, Google has said the company will accept liability if it's the technology's fault.

And the BBC notes that it "raises questions about whether the cars ... are too cautious."

In a statement, the Mountain View Police Department still said it was lawful for the car to be driving where it was. As for Google, the company says the cars have never gotten a ticket.

Google caps the speed of the prototype at 25 mph. In a statement, Google said part of the reason for the conservative speed limit is to make the cars "feel friendly and approachable."

"Getting these cars out into the public and allowing people to react to them and allowing us to see them out there, I think that's a huge deal. And most importantly, it's the necessary step to getting them to try it themselves," the director of the Google Self-Driving Car Project said.

So Google doesn't seem to be shying away from these kinds of interactions. In response to the stop, the Mountain View Police Department pointed out it meets regularly with Google to address road safety. (Video via Google)