A 'Frozen' Plane Proves Disney Is Never Letting It Go 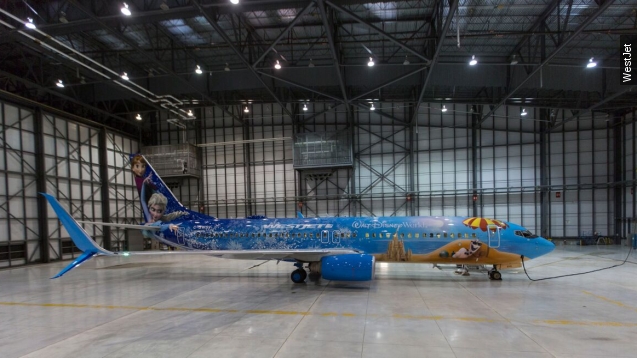 SMS
A 'Frozen' Plane Proves Disney Is Never Letting It Go
By Katherine Biek
By Katherine Biek
October 19, 2015
Disney and WestJet teamed up to create a "Frozen"-themed airplane, proving the movie is here to stay for a very long time.
SHOW TRANSCRIPT

It's been almost two years since Elsa told us to "Let it go" in the movie "Frozen," but Disney hasn't quite gotten that message yet.

Sure, the film grossed almost $1.3 billion worldwide at the box office. And yes, parents were scrambling to be among the lucky few to purchase Elsa dolls for their children for the 2013 holidays — but shouldn't we all be over this fascination with "Frozen" by now?

Apparently not, because Disney has teamed up with WestJet to create a "Frozen"-themed airplane. The Canadian airliner announced it took nearly 170 gallons of paint to decorate the outside and inside of the plane.

Funny enough, this Boeing 737 aircraft isn't strictly for flying WestJet customers to and from Walt Disney World. It will actually be used for flights all over North America.

As with its "Disney On Ice presents Frozen" show and its cruise to Norway, where the fictional town of Arendelle is located, Disney is hoping this move will keep "Frozen" firmly planted in everyone's heads. (Video via Disney Parks)

So if you're asking when Disney will stop pushing everything "Frozen" our way, the answer is as simple as: when we stop buying it.

The company reported $48.8 billion in revenue for 2014, and although it didn't specify how much of that came from "Frozen" merchandise, Disney did attribute a lot of its financial success to the film.

After all, an 18-hour live-stream event was set up on the official Star Wars YouTube page in September so fans all around the world could watch the unveiling of the new "Star Wars" toys. Seriously.

And since Disney already has two more "Star Wars" films in the works, expect many more years of new theme-park rides, toys and Halloween costumes in your future. (Video via Disney Parks)

And what do you know? Disney confirmed a sequel to "Frozen" back in spring. (Video via Walt Disney Studios Motion Pictures / "Frozen Fever")

Now, who didn't see that coming?