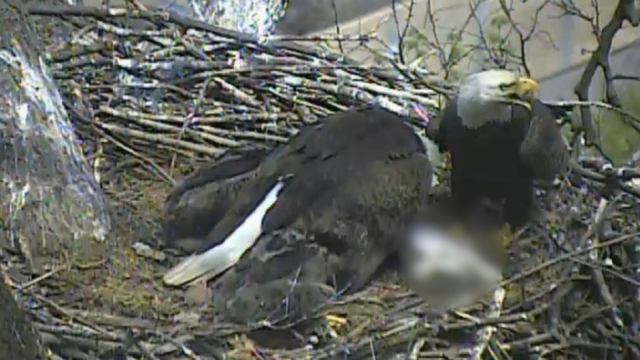 SMS
A Family Of Bald Eagles Ate A Cat For Dinner On A Live Webcam
By Ben Lawson
By Ben Lawson
April 29, 2016
A 24-hour live stream caught the eagles feeding a feline to their young.
SHOW TRANSCRIPT

Nature can be beautiful, but it can also be cold and brutal.

Case in point — the time a family of bald eagles ate a cat for dinner on a live webcam stream.

The eagles live near Pittsburgh, where the Audubon Society of Western Pennsylvania has a 24-hour live stream of the nest. The two eaglets are just over five weeks old.

The cat-eating incident happened earlier this week while an online audience watched in disgust. The Audubon Society says on Facebook it believes the cat was dead before it was brought to the nest.

A spokesman for the group said, "To people, the cat represents a pet, but to the eagles and to other raptors, the cat is a way to sustain the eaglets and help them to grow."

So there are two lessons here — one about the harsh reality of nature, and the other is about making sure Fluffy stays indoors.

This video includes a clip from the Pennsylvania Game Commission.