A Different Kind Of Deflategate: Giant Minion Lands On Road 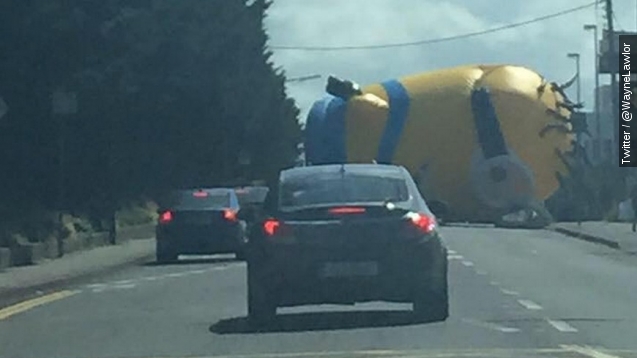 SMS
A Different Kind Of Deflategate: Giant Minion Lands On Road
By Christine Slusser
By Christine Slusser
August 4, 2015
A giant, inflatable character from the "Minions" film landed on a road in Dublin, Ireland, making commutes there a little more frustrating.
SHOW TRANSCRIPT

So here's your run-of-the-mill news story about a giant inflatable Minion blocking a road in Dublin ... wait.

"Luckily, no one was hurt, except for Kevin, who was feeling a little deflated," a WTVJ anchor said.

We'd say enough with the puns, but we can't resist.

We think the minion was just looking to inflate another evil master's ego.

"They're all different, but they all share the same goal. To find the biggest, baddest villain to serve," said someone in the film.

Hey, that road takes a beating every day from cars that weigh thousands of pounds, and it doesn't even break a sweat.

OK so what actually happened is this giant inflatable Minion, who we think resembles the character Kevin, got loose from its tether.

Police deflated the mammoth Minion. Irish Examiner talked to a person on the scene who said the generator was still attached and that a car lost a rearview mirror, but that was about all the damage it did.

Even with that evidence, we like our "looking for a new boss" theory better — but oh well.

This video includes an image from Twitter / @WayneLawlor and music from Kevin MacLeod / CC BY 3.0.