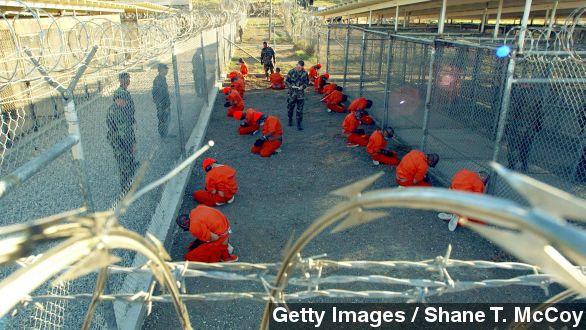 The U.S. Senate intel committee has released its long-awaited report on the CIA's Bush-era interrogation program. Here's a look at how a few of the torture techniques work.

When sensory deprivation is employed, the prisoners experience total silence and total darkness. Extreme isolation can cause hallucinations. (Video via BBC)

In the 1950s, a study from McGill University subjected volunteers to "near-total sensory deprivation." One participant saw "nothing but dogs." Another, a "green horse." One heard a "music box playing" and one heard a "choir singing in full stereophonic sound."

The Senate report uses Yemeni detainee Ramzi bin al-Shibh as an example, saying due to his isolation and long-term detention, he experienced "visions, paranoia, insomnia, and attempts at self-harm."

According to the report, some detainees were kept awake for more than a week, "usually standing or in stress positions, at times with their hands shackled above their heads."

Perhaps the most controversial and most widely publicized of all methods, waterboarding works by tricking a person's brain into believing he or she is drowning. The prisoner lies on an inclined platform like this.

Water is poured through the mouth and nose or on top of cellophane covering the prisoner's face. The lungs don't fill with water but feel like they do. (Video via Vanity Fair)

According to the report, during one session, Saudi Arabian prisoner Abu Zubaydah became "completely unresponsive with bubbles rising through his open full mouth."

This video includes an image from Getty Images, Karl Gunnarsson / CC BY SA 2.0 and the U.S. Department of Defense.