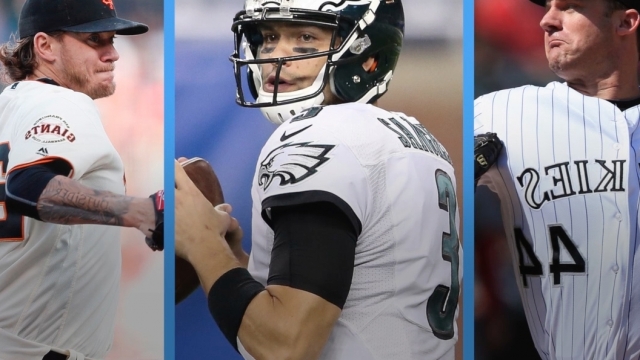 SMS
These Pro Athletes Say They Were Cheated Out Of More Than $30M
By Calvin Stovall
By Calvin Stovall
June 22, 2016
NFL quarterback Mark Sanchez accused a broker he met in church of mishandling investment money.
SHOW TRANSCRIPT

Pro athletes Mark Sanchez, Roy Oswalt and Jake Peavy are claiming they collectively got scammed out of over $30 million from 2010 to 2016. The alleged culprit? A broker they trusted to handle their finances because they thought he was a man of faith.

The U.S. Securities and Exchange Commission is charging Ash Narayan with posing as a certified public accountant and running a Ponzi-like scheme.

The athletes were reportedly looking to put their money toward "low-risk, conservative" investments. Instead, the money was allegedly funneled into a failing business without their knowledge or consent.

Narayan is accused of taking $15 million from Peavy and almost $8 million each from Sanchez and Oswalt to invest in a company that lets fans reserve tickets for big games, like NFL and college football playoffs, before teams are decided.

The suit alleges Narayan took advantage of NFL quarterback Mark Sanchez's religious beliefs after they met at a California church in 2009. Court documents say Sanchez, who was a rookie at the time, had his NFL paychecks deposited directly into an account Narayan handled. Sanchez said Narayan presented himself as a certified broker, devout Christian and philanthropist.

"Narayan exploited athletes and other clients who trusted him to manage their finances. He fraudulently funneled their savings into a money-losing business and his own pocket," an SEC official said.

Company executives Richard M. Harmon and John A. Kaptrosky are also charged in the case. Their lawyer claims they did nothing wrong and says they are also victims of Narayan's actions.

According to the SEC report, Narayan was on the company's board of directors, owned over 3 million shares and raised 90 percent of the company's funds. Records show the company compensated him with $2 million in finder's fees.

In mid-2011, Sanchez agreed to invest $100,000 in the company — previously The Ticket Reserve Inc. and now TeamTix — but the complaint alleges Narayan forged documents and sent over $7 million of Sanchez's earnings to the company.

Documents say Narayan also took the majority of Peavy's MLB wealth after meeting him through a teammate between 2004 and 2005. Narayan met Oswalt, who is now retired from Major League Baseball, between 2003 and 2004.

The company's account has been frozen to protect the assets of the investors while the SEC pursues the case against Narayan.