A Chickenpox Scare Won't Take The Royals Down, Right? 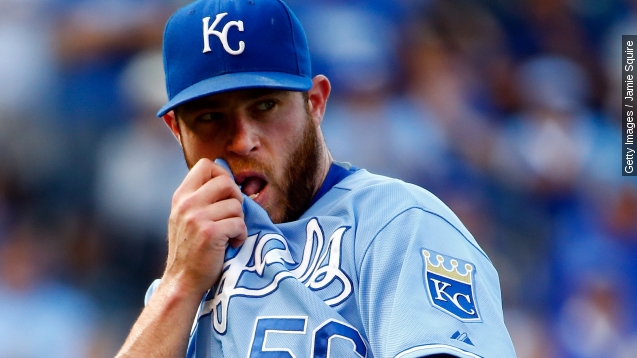 SMS
A Chickenpox Scare Won't Take The Royals Down, Right?
By Carter Woodiel
By Carter Woodiel
September 1, 2015
The Royals' Kelvin Herrera and Alex Rios have both been put into quarantine, but the chickenpox outbreak could still spread.
SHOW TRANSCRIPT

An outbreak of chickenpox sounds like something more likely to affect a T-ball team than a major league club.

But two key players on the Kansas City Royals have been diagnosed with the illness, and trainers are scrambling to find out who else could be at risk.

The team has quarantined All-Star relief pitcher Kelvin Herrera and outfielder Alex Rios. Both of those players showed symptoms while the Royals were on the road, and each was sent back to KC on a private jet.

Chickenpox is usually contracted before adolescence, but it can be much more severe if someone catches it later in life, including the risk of possible complications like pneumonia.

And people who contract chickenpox take a week or two to show symptoms, meaning there could be players in the Royals’ clubhouse who are infected without even knowing it.

Infections disease outbreaks seem to have been hitting sports leagues hard lately. A mumps outbreak affected over a dozen NHL players last year, and one former NFL player sued his team in April over a staph infection he says he contracted at a team facility in 2013.

As far as the Royals are concerned, they’ll be without Herrera and Rios for at least a couple of weeks.

Herrera has a sparkling 2.12 ERA this year, and Rios was the club’s starting right fielder.

The Royals were concerned enough about Rios to find a last-minute replacement — Braves outfielder Jonny Gomes, whom they grabbed just hours before MLB’s final trade deadline. (Video via The Kansas City Star)

In the meantime, team trainers are surveying players, trying to figure out who’s contracted the disease before and who could still be at risk.

Starting pitcher Yordano Ventura is in the latter group, but he doesn’t seem to be worried.

According to Yahoo’s Jeff Passan when asked about it, “He flexed his biceps.”

Royals fans shouldn't be too worried about chickenpox affecting their team's postseason hopes. Kansas City has a bigger lead in their division than any other MLB team.

This video contains images from Clair Thompson / CC BY 2.0 and Getty Images.