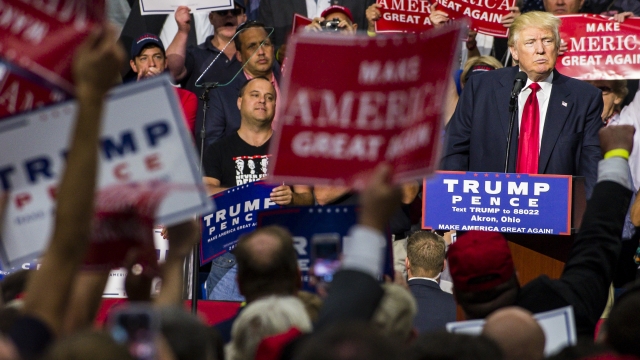 "We're going to go through the process like they are now, perhaps with a lot more energy.  And we're going to do it only through the system of laws," Trump said in an interview on Fox News.

By promising to essentially stick to the current immigration process, Trump might be walking back his controversial illegal immigration plan. For a refresher: Trump originally planned to create a deportation force to remove the 11 million undocumented immigrants in the U.S., saying all of them "have to go."

But in recent interviews, the Trump campaign seems to be signaling a switch to be more in line with most politicians: Follow the existing law, and focus on deporting criminals. And that last part is basically what his rival Hillary Clinton has proposed to do.

Trump changing positions isn't new, but a massive change this late would be a big deal. As the general election gets closer, nominees usually shift toward the center on a lot of policies. But this shift could alienate some of his supporters, and it probably won't be enough to change the minds of other voters.

Yes, Trump's supporters are extremely loyal; once they like him, they tend to stick with him come hell or high water. But Trump's immigration stance is the heart of his candidacy and is a key issue for many of his most vocal supporters. And for voters who already don't trust him, there's a strong chance they may judge this as an inauthentic flip-flop.

Adding more fuel to the fire, an immigration policy speech was postponed less than a week after the Trump campaign got new management.