A Cavaliers Resurrection, Brought To You By LeBron James 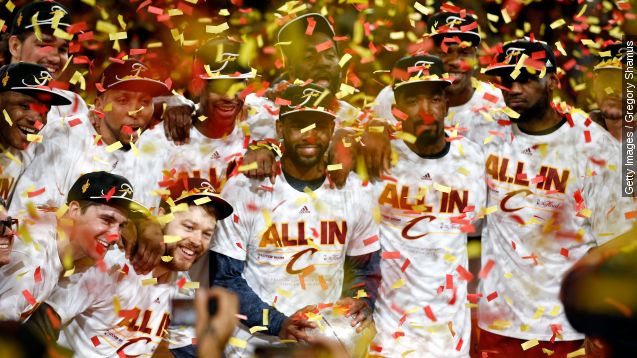 SMS
A Cavaliers Resurrection, Brought To You By LeBron James
By Jamal Andress
By Jamal Andress
May 27, 2015
The Cavs have swept the Celtics, beat the Bulls four games to two and swept the Atlanta Hawks on their way to the NBA Finals.
SHOW TRANSCRIPT

With Tuesday's win over the Atlanta Hawks, the Cleveland Cavaliers made it back to the NBA Finals for the first time since 2007. Back in '07, James and the Cavs lost to the San Antonio Spurs in the NBA Finals, and three short years later:

"I'm gonna take my talents to South Beach" LeBron James said during the infamous "The Decision" show broadcast on ESPN.

"For him to drag us through the mud like this, he deserves everything he gets!" a Cavaliers fan said.

For the next four seasons the Cleveland Cavaliers would struggle, while the Miami Heat's Big Three went to the finals, over and over again.

In the 2010-2011 season, Cleveland finished last in the Eastern Conference and second to last in the league. With an abysmal 19-win season, it was clear the Cavs missed its king.

The one bright spot would be the Cavaliers lottery luck. Despite having the second worst record in the league, the Cavs won the NBA draft lottery and used its pick to select future rookie of the year Kyrie Irving.

But Irving's outstanding rookie season wouldn't be enough to push the Cavs to the playoffs or even to a .500 record. The Cavs finished last in the division again and third worst in the conference.

The next two seasons wouldn't be much better. The Cavs didn't make the playoffs four seasons straight and couldn't crack .500 any season without James in a Cavaliers jersey.

This despite two No. 1 overall overall picks in three years and Irving continuing to put up all-star numbers.

Then, the King came home, and everything changed for the Cavaliers. (Video via Cleveland.com)

This season the Cavs racked up 53 wins, making James & Co. first in their division and second in the conference. The team stats jumped, going from 22nd overall in points per game to eighth, and 20th in assists per game overall to the 10th best in the league. (Video via Sprite)

This was in large part due to LeBron putting up LeBron-esque numbers all season and even more so in the playoffs where his usage rate is a staggering 36 percent, the highest of any player this postseason. In other words, every three Cavs possessions, LeBron touches the ball at least once.

The Cavs have so far swept the Celtics, beat the Bulls four games to two and swept the Atlanta Hawks on its way to the NBA Finals.

All that's left is to bring Cleveland its first professional sports championship in more than half a century.