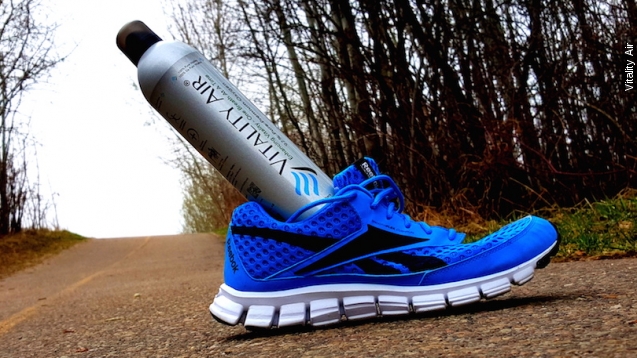 SMS
A Canadian Company Is Literally Selling Breaths Of Fresh Air In China
By Grant Suneson
By Grant Suneson
December 15, 2015
Canadian company Vitality Air is canning oxygen from the Rocky Mountains and selling it for over $15 a bottle. It's selling well in smoggy China.
SHOW TRANSCRIPT

It's well known that China is having issues with its air quality. Residents have tried everything from covering their mouths to vacuuming up the pollution themselves, but now a Canadian company is offering a different approach to dealing with the smog. (Video via CNN)

Vitality Air is capturing oxygen from a few spots in the Rocky Mountains and shipping it to China for at least $15 a bottle.

And if that sounds like a joke, that's because it was at first. The founders sold a Ziploc bag of air for 99 cents as a gag in 2014. (Video via Metro-Goldwyn-Mayer / "Spaceballs")

But when they tried again, the second bag went for more than $160, which proved to the company that there's a market for clean air in some parts of the world.

Vitality Air co-founder Troy Paquette told Vice: "As much as it started out as a novelty idea, with the really bad smog they've had in Beijing, we're finding people are buying it as more than just a novelty, but for everyday use. There's been quite a demand."

He added that the company has also garnered interest from Iran and Afghanistan, but China is the main buyer.

The country has had consistently high pollutant levels this year. Last week, Beijing reached the highest level alert for air quality. Officials even had to tell children and the elderly to stay inside because the smog was too hazardous. (Video via Deutsche Welle, CCTV America)

So it's understandable that some Chinese citizens are willing to pay top dollar for a breath of fresh air.

The company told The Telegraph it sold its first shipment of 500 bottles in four days, and there are thousands more being shipped to China now.