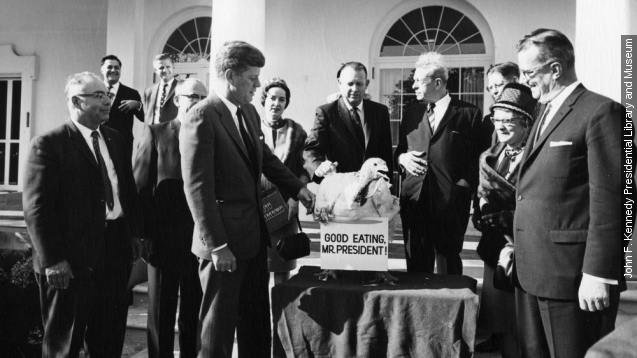 SMS
A Brief History Of Presidents Pardoning Turkeys
By Kate Grumke
By Kate Grumke
November 25, 2015
This Thanksgiving tradition isn't as old as you think it is.
SHOW TRANSCRIPT

But presidents pardoning turkeys is actually a recent tradition. (Video via C-SPAN)

We all know Ben Franklin was in the turkey fan club, calling the turkey "respectable" and a "Bird of Courage." Franklin even said the turkey "would not hesitate to attack a Grenadier of the British Guards who should presume to invade his Farm Yard with a red Coat on." (Video via YouTube/ TheTravelsTV)

And there's a story that Abraham Lincoln's son convinced him to pardon a turkey.

President Truman was the first to have a turkey-receiving ceremony, and Eisenhower continued the tradition. But these guys were destined for the dinner table.

President Kennedy was the first to spare a turkey. He sent this one home just three days before he was assassinated.

For a while after that, official turkeys were taken to petting zoos. (Video via Reagan Foundation)

But we didn't get our first official pardon until George H.W. Bush.

Every president since then has upheld the tradition. (Video via C-SPAN)

And so have some presidential candidates. (Video via Independent Journal)

This year, Obama officially pardoned Abe, and dubbed him TOTUS: The Turkey of the United States.