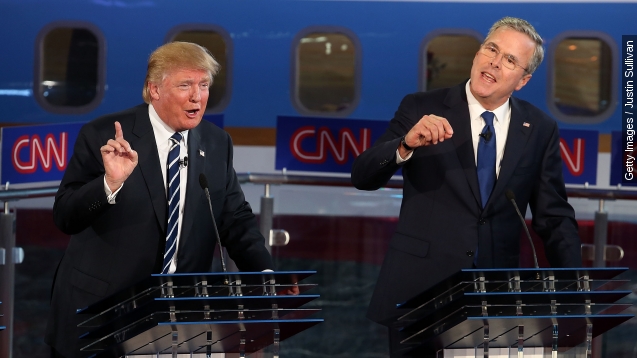 Donald Trump is at it again. That is attacking his Republican rivals via Twitter. This time he focused his ire on Jeb Bush.

In a series of tweets Friday, Trump called his 2016 rival Jeb Bush "dumb as a rock" and said his campaign was incompetent.

Bush, for his part, has also been giving as much as he's been getting on Twitter. He's even comparing Trump's ISIS strategy to that of Hillary Clinton's.

But it's not just Twitter where Bush and Trump butt heads. Bush has been one of the few Republican candidates willing to go after Trump in the debates. (Video via CNN)

And Bush has a lot of anti-Trump ads on his official YouTube channel. (Video via Jeb 2016, INC)

At a campaign event in New Hampshire Saturday, Bush had this to say about the candidate: "I've got to get this off my chest – Donald Trump is a jerk."(video via CNN)

This recent wave of attacks on Trump might come from Bush's performance in the last debate.

Trump, of course, has never been shy about attacking Bush. (Video via CBS)

And he's gotten good at using social media to do so. (Video via Instagram / Donald Trump)

But of course, this is a presidential election so some mudslinging is to be expected. Hey, at least it's kind of entertaining this time around.