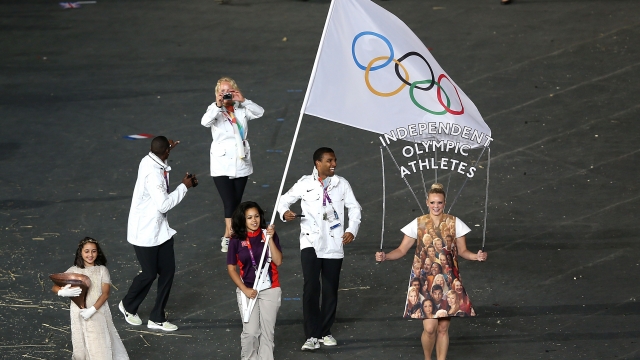 Which athletes fly the five-ring flag at the Olympics?

"Swimmer Yusra Mardini is hoping to compete in this summer's Rio Olympics," a 5 News reporter said.

The 2016 team of independent Olympians consists of 10 athletes from Syria, South Sudan, Ethiopia and the Democratic Republic of the Congo.

This year's team is called the Refugee Olympic Athletes, and they are one of many teams to compete under the Olympic flag.

Previous teams have gone by different names, and they've all been created under different circumstances: political transitions, international sanctions ...

... not having a National Olympic Committee or cheating scandals.

SEE MORE: The Olympics Are Forcing Rio's Poorest Citizens From Their Homes

In fact, one of the only things that's been consistent with teams of independent athletes is performance. They usually don't do well; although, their chances of medaling are slimmer since the teams have been pretty small.

So far, the '92 team in Barcelona is the only team of independent athletes to medal. They were also the largest team — by 54 people.

But for this year's athletes, it's not just about the hardware.

"I will be very proud, because I will compete with world champions," Refugee Olympic Athletes member Rami Anis said.

"I want to represent all of the refugees of the world," Popole Misenga said.

"I want to show everyone that after the pain and after the storm comes calm days," Madini said.