A Brief Guide To Islam In France 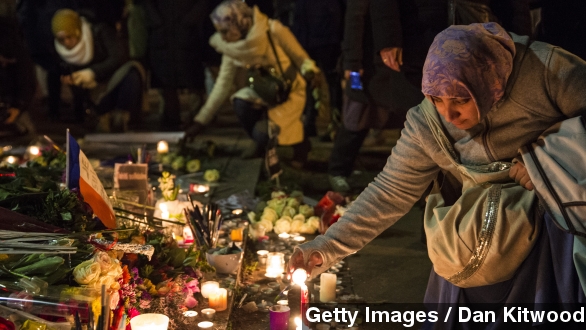 The terrorist attack on satirical magazine Charlie Hebdo has inspired a nationwide show of solidarity. But it's also reopened the rift between France's sizable Muslim population and the rest of the nation.

One Parisian told The New York Times, "France has always had — I wouldn't say hatred — this suspicion of Islam and Muslims. It already exists."

Prominent Muslim leaders in France are worried there could be more backlash to come, telling Al Jazeera the attack was "a veritable nightmare for the Muslim community” that would “enable people to attack Muslims."

To understand the current climate in France, it's important to know a little bit about the country's unique history with its sizable Muslim population.

Islam in France stems from an immigration boom in the country’s post-WWII reconstruction. Demand for labor in the 1960’s encouraged immigration from former French colonies like Morocco and Algeria.

Though the country doesn’t keep official records, it's commonly estimated about 5-6 million Muslims live in France. That's around 7 percent of the population, the largest proportion in Europe.

But Muslim immigration into France has dropped dramatically since the '60s. Today, much of the country’s Muslim population is second-generation immigrants, born and raised in France.

France has a unique integration challenge; the country has long taken pride on an agnostic, egalitarian acceptance of every citizen’s universal rights.

The reality is, of course, more complicated. The majority of France's second-generation Muslim citizens do consider themselves French and hold Western values, according to recent research.

But decades of social stagnation in the country, combined with economic discrimination, have ostracized France's Muslim community, creating ghettos of disaffected young citizens.

Policies designed to further integration can become problematic. France's national identity as a secular nation has occasionally been used to target the Muslim minority.

Take laïcité, the French concept of rigorous separation of church and state. The supposedly agnostic principle led to controversial laws effectively banning headscarves in public places in 2003 and the full veil in 2011.

Detractors are quick to point to riots — most famously in 2005 — in Muslim-dominated neighborhoods as evidence that integration isn’t working.

And Charlie Hebdo wasn’t the first victim of Islamic extremism in the country. The 2012 mass shooting in Toulouse and the 1995 subway bombing both served to widen the divide between France’s Muslim community and its other citizens.

The perpetrators of the Charlie Hebdo attacks weren’t the only French Muslims involved. Two victims of the attack  — a French police officer and a copy editor killed by the terrorists  — were Muslim as well.