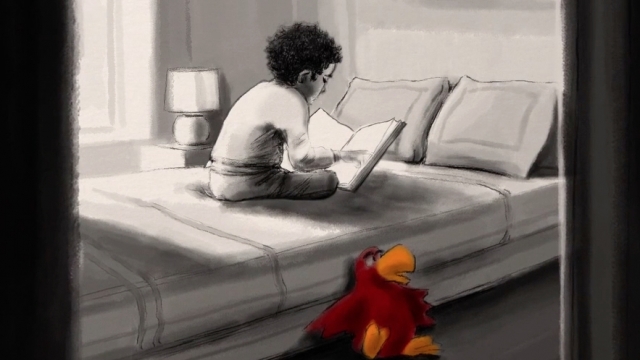 SMS
A Boy's Love Of Disney Was The Key To New Autism Therapy
By Calvin Stovall
By Calvin Stovall
March 29, 2016
A magical moment between a father and his 6-year-old son inspired a new autism approach called affinity therapy.
SHOW TRANSCRIPT

In the documentary "Life, Animated," Ron Suskind remembers every detail of the first conversation he ever had with his son.

"Not good because I don't have any friends," Owen Suskind replied at the time.

Ron and his son talked for another minute, and Owen even quoted one of Jafar's lines from "Aladdin.""That was the breakthrough," Ron says. His son was 6 years old at the time.

Like 1 in 68 kids today, Owen grew up with autism spectrum disorder. Ron saw Disney as a bridge into his son's world.

"We were taught by therapists that these are obsessions. This is the way people in autism thought about it for a long time: 'Wean the kid off of it; it's not productive,'" he said in an interview.

The Suskinds didn't follow this advice. They mixed "Disney therapy" with traditional behavioral and cognitive therapies.

Speech language pathologist Michelle Garcia Winner, who worked with Owen to help prepare him for independence, also used Disney in her therapy.

"A way to get Owen to learn is really by focusing a lot of learning around the thing he's going to pay attention to and actually seeking to learn on his own, which is Disney," she says.

Owen now works at a local movie theater and has his own apartment. He hopes to join the Disney animation team someday.

MIT and Yale are now researching affinity therapy, a term the Suskinds coined."Life, Animated" will be released in July.