A Big Part Of 76ers' Future Rests On Ping-Pong Balls 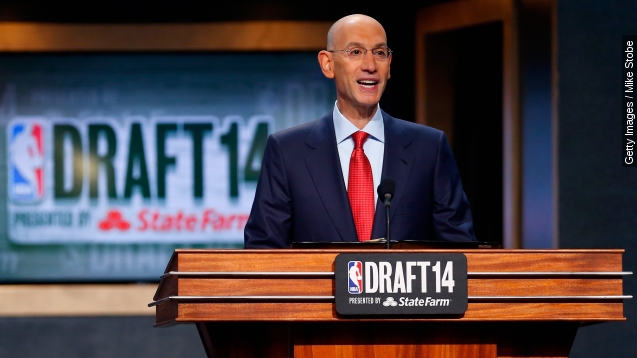 SMS
A Big Part Of 76ers' Future Rests On Ping-Pong Balls
By Matt Moreno
By Matt Moreno
May 19, 2015
The Philadelphia 76ers could come out of the NBA draft lottery with three of the top 13 draft picks thanks to a disappointing season and trades.
SHOW TRANSCRIPT

And the fate of 14 multimillion-dollar NBA franchises.

One seems a little more important than the other, right?

This year, the 16-66 Minnesota Timberwolves own the best odds with a 25 percent chance of getting the first pick. The New York Knicks and Philadelphia 76ers follow them up with the second and third best odds, respectively. The Oklahoma City Thunder, the best team to miss the postseason, have just a half-percent chance of stealing that No. 1 spot.

It all sounds easy enough, but trades and puposefully tanking during the season are making the process drastically more difficult.

Philadelphia is definitely the talk of the draft.

The 76ers have been tanking all season, and just about everyone took notice.

But the tanking might just pay off. Along with their nearly 50 percent chance of getting into the top three, they've got an outside chance of acquiring three picks in the first round, thanks to trades with the Miami Heat and LA Lakers.

The 76ers summed it up in this tweet, simply saying, "Big day."

The Sixers traded away guard Michael Carter-Williams to the Milwaukee Bucks earlier this year in a three-team deal, netting them a Lakers draft pick if that pick falls to sixth or seventh overall. Philly also owns the rights to Miami's first-rounder after trading Thaddeus Young to the Timberwolves last year. The Sixers will get that pick should it fall to the No. 11, 12 or 13 spots.

So is Philadelphia really going to get rewarded for intentionally losing, and will plastic table-tennis balls decide that?

This, among many other reasons, is why there are so many calls and proposals to revise the draft lottery — though NBA owners have shown they're not quite ready for change.

Despite the controversy, the NBA lottery is definitely unpredictable. What are the odds the Chicago Bulls would end up with Derrick Rose in 2008? One-point-seven percent, actually.

The Timberwolves have never owned the first overall pick.