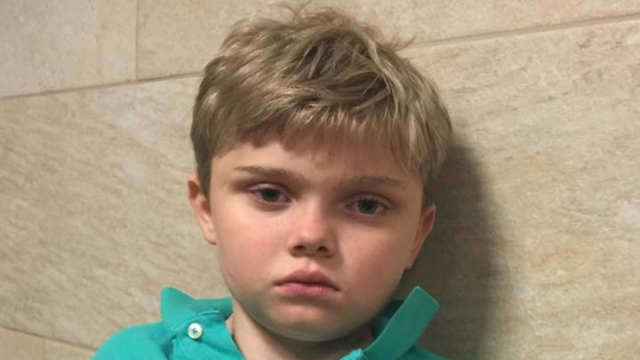 SMS
This 9-Year-Old Boy Was Held By TSA Agents Because Of His Pacemaker
By Briana Koeneman
By Briana Koeneman
August 24, 2016
Chille Bergstrom was born with a rare heart condition, and he needs a pacemaker to keep him alive.
SHOW TRANSCRIPT

A 9-year-old boy and his family say they were held by TSA agents in Phoenix for more than an hour in what they're calling a traumatic and discriminatory ordeal.

And it was all because of the young boy's pacemaker.

"It was really terrible. I thought it was my fault," Chille Bergstrom told KMSP.

It all started when Chille Bergstrom and his mother, Ali, were heading through security at Sky Harbor International Airport in Phoenix Saturday morning.

See, Chille was born with a rare heart condition that has forced him to undergo 15 open-heart surgeries, and he needs a pacemaker to keep him alive.

Because of Chille's pacemaker, he can't go through the scanning equipment at security checkpoints. He normally presents his medical paperwork and gets an alternative screening, like a pat-down.

Which is exactly what the TSA's website says individuals with pacemakers and other internal medical devices must do.

But Ali says when they asked for an alternative screening for Chille, TSA agents said they needed a special exemption.

From there, Ali says armed police officers and TSA agents subjected them to a lengthy and demeaning search.

In a Facebook post about the incident, Ali said one of the agents told them "some terrorist plots use children with pacemakers."

The Bergstroms were finally able to fly back home to Minnesota 14 hours later, thanks to the delay and bad weather conditions.

In response to Bergstrom's claims, the TSA published a blog post Wednesday saying protocol was met and the boy and his mother were given the appropriate screenings.