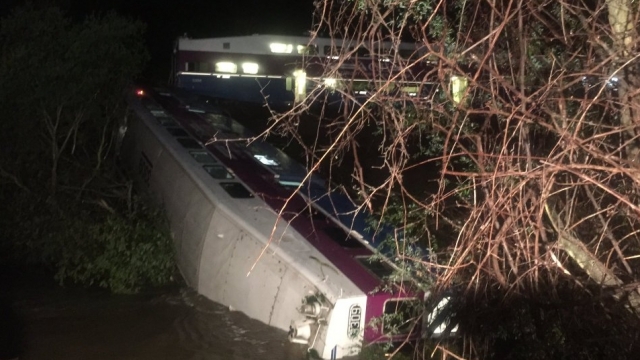 SMS
9 Injured After California Commuter Train Derails And Lands In A Creek
By Ben Lawson
By Ben Lawson
March 8, 2016
The train was traveling from Silicon Valley to Stockton when it derailed Monday evening.
SHOW TRANSCRIPT

At least nine people are injured after a commuter train derailed in California Monday evening.

Officials say an Altamont Corridor Express train was traveling from Silicon Valley to Stockton when it struck a tree that had fallen on the tracks.

"I held on to the rails and right then the train flipped over. ... The next thing we knew we started seeing water coming into the bottom of the train," said a passenger on the train.

The first train car overturned and ended up partially submerged in a nearby creek. The second car derailed but stayed upright.

Four of the people hurt in the crash had serious injuries, but none were life-threatening. More than 200 people were on board at the time of the crash.

The train company has announced that no trains will run on Tuesday.