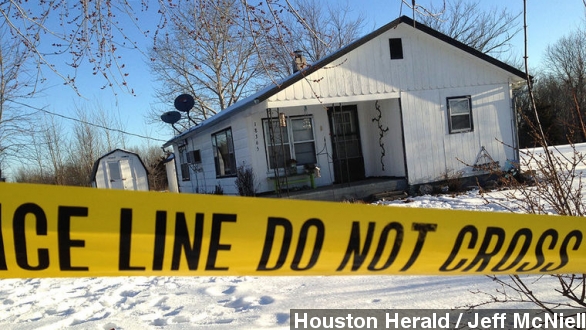 Police have identified the gunman responsible for a series of shootings in a small south central Missouri community as 36-year-old Joseph Jesse Aldridge. Officials have also identified some of the seven victims in the case as family members of the shooter.

Nine people were found dead and one injured at several different locations in and around a small Missouri community called Tyrone Thursday night into Friday morning. Police have confirmed Aldridge is among the dead, in what appears to be a suicide.

Sgt. Jeff Kinder of the Missouri State Highway Patrol told reporters, “This is also hard on the police officers who were working that there. It’s not natural to see that sort of thing and I’m sure they were as shocked as a lot of the people were,”

Local officials say there are four crime scenes in Tyrone — an unincorporated community — and one more crime scene in neighboring Shannon county, where the shooter was found dead in a car.

The Houston Herald is based about 10 miles from Tyrone and had photographers on multiple scenes overnight.

The newspaper has shared these photos with Newsy and reports neighbors near one scene got a knock at the door from police around 3:45 Friday morning. Authorities appeared to be checking for more crime scenes and asked those neighbors about anyone injured or killed in their homes. The officers then told those people to stay in their homes and not open their doors to any strangers.

Friday morning, the Missouri Highway Patrol sent out this press release saying police got involved late Thursday night when a girl fled a Tyrone house after hearing gunshots. The Patrol clarified that one of the nine people found appeared to have died of natural causes — an elderly woman found during the home searches.

One of the nine people found dead was the shooter’s mother, who appears to have died of natural causes at Aldrige’s house. There is speculation that her death sparked the violent events that followed.