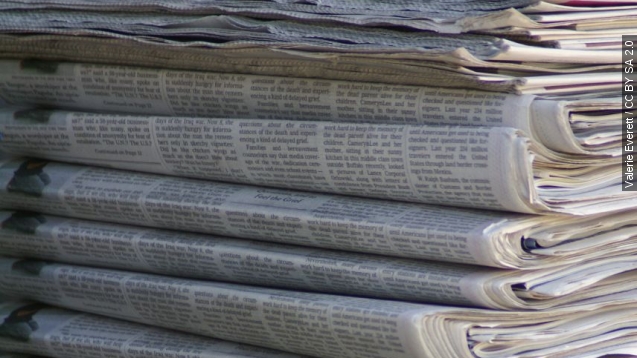 A little girl started a newspaper. Cute. But what makes this newsworthy is she's not only good at it, but she also runs Selinsgrove, Pennsylvania's, only monthly newspaper.

And like good journalists, we're going to cite our source for this story. Columbia Journalism Review brought Hilde Lysiak's newspaper to our attention.

She's got bona fide news sense, too. CJR reports instead of covering a fluff story on Selinsgrove's Ta-Ta Trot, a 5K that raised thousands of dollars —

Hilde was out knocking on doors interviewing people about a tornado that hit town.

And if you're so moved you want to be a part of it, The Orange Street News is hiring. You won't get paid, though.

But to be fair, that's kind of realistic. Journalists generally don't get paid much — or at least their pay is below average.

Government reports say the average annual pay for a newspaper journalist is nearly $41,000. In 2013, the Social Security Administration put the national average wage for all jobs at just over $43,000.

But back to Hilde. She decided to be a reporter because she was inspired by her journalist father who worked for the New York Daily News.

And Hilde's oldest sister, Izzy, has the media bug, too. She has a YouTube channel where she's made short films.

Izzy is also a kid columnist for a local newspaper and is paid $25 a week. We aren't sure if there's a divide between the two because her older sister works for a competing paper.