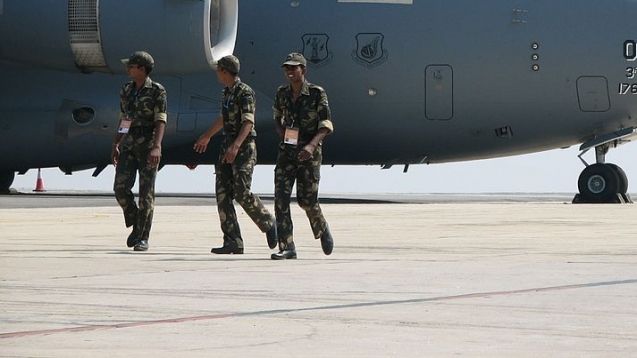 SMS
8 Dead After Indian Air Force Base Attack
By Melissa Prax
By Melissa Prax
January 2, 2016
An Indian air force base was the target of a recent attack, which officials are investigating to see if it has a link to a Pakistani terror group.
SHOW TRANSCRIPT

Authorities say the terrorists are the same ones that allegedly abducted and beat a Punjab police superintendent Friday night. (Video via IndiaTV)

The abduction put the northern state on alert and prompted a search of the Pathankot Indian air force base when gunmen infiltrated the area.

The air force base is close to the India-Pakistan border, which has resulted in some officials pointing the finger at the Pakistan-based Islamist terror group Jaish-e-Mohammad.

India and Pakistan haven't been on the best terms historically, and some hoped a recent visit with the two prime ministers in Pakistan would rekindle ties.

Pakistan was quick to resist claims of the terrorists being Pakistani. But Indian police are investigating phone calls made to Pakistan from the gunmen. (Video via Times Now)

Authorities say the goal of the alleged terrorists was to destroy key parts of the base. (Video via NDTV)